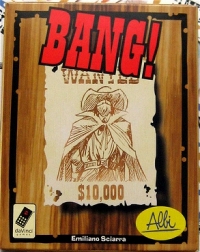 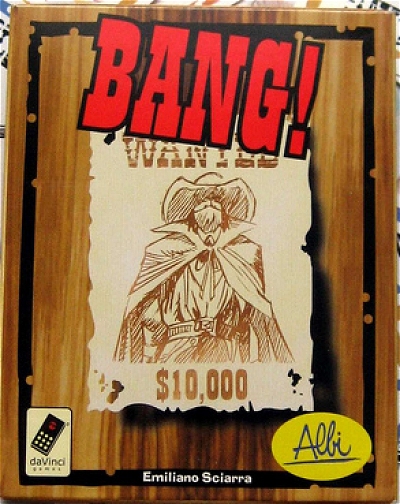 Bang! breaks new ground with cross platform mulitplayer, but it's the quality of the gameplay that has got my family hooked (again) on this great parlour game.

Parlor games have had something of a resurgence in the gaming community the last few years -- after-dinner games played in a group where each person is assigned a role and mission. The aim is to work out the other people's role to stop them completing the mission.

In Mafia for example, players are either "mafia" who know who each other are; or "townspeople" who only know how many mafia are out to murder them. Then during the day turn the players debate who the mafia are and decide to eliminate someone. During the night turn the mafia secretly choose a towns person to murder. It all gets political very fast as players make claims and counter-claims about who they think are the Mafia and should be taken out.

Most recently I've been enjoying an electronic version of a parlor game on my iPhone called Bang! It's based on the Bang! card game. This takes the political element of pure parlor games and combines it with a strategy card game. It has meant that although my kids find a full-on parlor game too confusing to play (and a little bit frustrating when they get eliminated), they got on fine with Bang!.

Bang! (iPhone/iPad) has been out for a while, but this month they are adding a unique cross platform multiplayer mode. Before I get to that though, I should outline how it is played...

Bang! has a spaghetti western theme and each player is randomly assigned a character that determines their objective for each round. This creates a web of competing interests - the Outlaws hunt the Sheriff; the Sheriff hunts the Outlaws; the Renegade takes one side or the other and the Deputy protects the Sheriff.

The novelty here though is that nobody knows what each player's role is - except that of the Sheriff. As play proceeds, by drawing and playing cards to attack or defend against other players, everyone tries to identify who is playing each role from each other's behaviour.

Once you have set things up and been allocated characters and role, Bang! proceeds in clockwise order starting with the Sheriff. Each player's turn is divided into three phases, drawing two cards, playing cards to attack other players and defend themselves and finally discarding excess cards at the end of their go.

The kids could play by themselves on the iPad.

To shoot at another player during the second phase a "Bang!" card is required. Players can only shoot those next to them unless a weapon upgrade is in play that increases their range. Defending players can avoid being shot by playing a "Missed" card.

The iPhone, iPad and PC versions of Bang! really helped my whole family get into the game. It helped that the electronic version has some great visuals and sound effects, but the real difference was that it handled the rules for us.

This meant that the kids could play by themselves on the iPad, which they really enjoyed doing -- especially when they had friends over. We could also play the game between the iPads over our local network which again they took great delight in doing in secret after they had been put to bed -- playing between the two bedrooms. They would have got away with it if they hadn't been giggling so hard.

Hearing about new cross-platform multiplayer feature seemed to get them excited about the game again. From Saturday 12th November you will not only be able to play against others on the same gaming device, but between iPhone/iPad/Atom Netbook and PC in any combination.

It seems kind of fitting that this cross platform multiplayer gets one of its first airings for a card game that was all about lowering the barrier to entry and getting everyone playing together.

Having blogged about the game quite a lot the developers asked us to jump on and give it a try. It works really well. You simply select either Quick or Custom game and then pick the game you want to join from the list. We setup a Custom game with a password so our kids (on our iPad) could play with their grandparents (on their PC) and me (on my iPhone). We each added the password to our custom game search to find the right game.

Although this took a bit of coordination via Skype, and could have been a little easier in the game itself, once we had worked out how to do it (helped by their Bang! FAQ) we were soon happily playing.

It was strange to be playing against someone on different technology. I'm so used playing against people on either PSN or Xbox Live that I actually forgot that my kids and parents were seeing the game through a different device.

Play against others on the same gaming device, but between iPhone/iPad/Atom Netbook and PC in any combination.

That evening I followed up with some quick matches against random opponents. These were quicker and easier to setup because the game handles all the matchmaking for you. Although not being in the same place meant that you had to read more into the moves players were making rather than expressions and body language.

Throughout it all Bang! remained a very enjoyable game. In fact, having been reminded how good it was, I ended up inviting some friends around to play the card game again next week. There are not many videogames that do that.

As Daniele Azara, Production Director of Palzoun said "We wanted to recreate the experience of playing a card game around a table and developing the game for Apple iPhone, iPad, Netbook and PC." On the basis of our experience with the game I think they, along with partners SpinVector, have done just this.

You can support Andy by buying Bang! Cross Platform Multiplayer