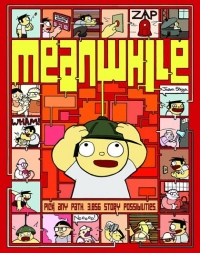 Meanwhile is a choose your own adventure book. As a gamer it made all sorts of connections for me - split screen shooters, in-game tutorials, replay value not to mention the currently vouge multiple endings. But more than this Meanwhile was a space in which to loose myself for an evening - complex, compelling and endearing.

Steve Jackson's and Ian Livingstone's Ian Jackson Fighting Fantasy books were mandatory reading for anyone at all boy-ish or nerdy growing up in the 80's. Combine these with Tolkien's Ring trilogy and you have the source material for the majority of games on the era's cutting edge hardware.

Technology though, is a hard master and in the interiening years books like these, pen and paper adventures and other physical forms of entertainment were left languishing as the PlayStation generation were born. Marketing and monetisation of the electronic era seemed to seal the deal as the world moved on from printed experiences to the screen.

It's with some glee then that this book, Meanwhile from Jason Shiga, seems to complete the cycle as well as pointing to life after the video game revolution. Technology wise it feels more like a gadget than a book. The pages are thicker and tabbed for the complex navigation through its pages. As an artifact there has been as much love and attention invested here as any videogame - and on that front it brings to mind one-man-band creations like Jonathan Blow'sBraid.

But this is more than just a highly engineered Fighting Fantasy experience, its graphic novel format creates a pacier and more intimate experience. Here I should explain a little of how it works, but you'll have to read it yourself to get the full effect. At various times on each page you are offered two paths from the current cell, choosing one of these results in a different direction for the story and usually turning to a page as directed by the coloured tabs. It sounds complicated but in practice is direct and effective.

It feels similar to playing a game like Heavy Rain.

With minimal instruction you are quickly into the minuatia of the story, making choices and trying to second guess outcomes. It feels similar to playing a game like Heavy Rain, you soon forget the mechanic and engage directly with the task in hand. But here the story is much more complicated than most games I've played.

Meanwhile takes you by the hand through a series of cyclical puzzles than invovle time travel, mind reading and potential worldwide destruction. Like point and click adventures you soon realise you have to obtain certain information before you can proceed.

The simple cartoon format belies the complex hierarchy of demands and puzzles that must be attended to in order to finish the book and save the world. It's surprisingly compelling. In fact, as soon as I met the end of one particular story (of which there are apparently 3856), I would be flicking back to the beginning to try again.

But unlike a videogame that comes packed with a degree of alienation, the familiarity and friendly nature of a book meant I could easily share the experience with friends and family - and with none of the incredulous looks from trying to extol the likes of Halo or Mass Effect.

Takes back the adventure from the screen and places it firmly on the page.

Meanwhile is a book that takes back the playable adventure from the screen and places it firmly on the page. In doing so, it recreates many of those videogame moments. Momentarily glancing round the page offers hints of what may be next, much like the glimpses of my opponent's world in split screen shooters. The sense of consequence and real chance of death drew water from the same nervous pool that Mass Effect and Heavy Rain have recently visited. The miniature nature and ease of replay more than aped the one more go nature of those Wario Ware experiences.

But while I can't help but reference my gaming world when I encouter other media, this is one book that stands on its own merits. In fact, because it seems to be drawn from the same place that many videogames come, it has much to say about the electronic games we play as they do to it.

You can support Andy by buying Meanwhile