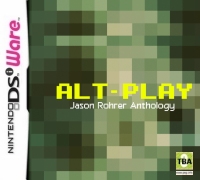 Alt-Play demonstrates just how powerful simple gameplay can be. As emotionally charged as they are unusual, this collection of three DSi-ware games are a genuine grownup experience.

It's not often that a videogame perplexes or moves me, but this one did just that. It stayed with me just like watching American Beauty left me both unsettled and intrigued for days.

Alt-Play: Jason Rohrer Anthology brings three of Rohrer's left-field indie games to the DSi. Although they are each already available on the PC for free, having them in a package like this was the tipping point that got me to really engage with them.

The bundle of games costs just 200 points and includes Passage, Gravitation and Between. Each offers a very distinct experience but is united by a similar look and feel. You control an unnamed pixilated character and explore abstract fields and towns.

Although the games all keep track of your score, accruing points isn't really the point of the exercise. The agenda here is more like a playful experiment than a game. You see, each experience is designed to offer the player choices that in some way mirror real life.

The games are interesting not because of how clever the gameplay mechanics are, or because they have beautiful graphics and sound design. They are interesting because of the emotional response and personal choices they create in the player.

Because of this, different people will have a stronger response to different elements. For me it was Passage that really rocked my boat.

In Passage you play a small pixelated young man. You can only see a thin horizontal strip of the world which at the start extends off into the distance. As the game progresses you explore the space in front of you and discover not only treasure but an (equally pixelated) companion.

Each experience is designed to offer the player choices that in some way mirror real life.

The choices you make about how you spend your time in the game affect your overall experience. You can hook up with the girl and have a companion for the duration, but this will limit you from entering some narrow passages where the two of you won't fit. You can charge forwards to try and get to the hills you see in the distance, or you can try and find every last item of treasure where you are.

What you don't know the first time you play it (ed: now's the time to stop reading and try it for yourself if you don't want it spoiled) is that you only have about eight minutes in the game world before you die. Every second that passes means that you and your companion grow visibly older. As minutes pass in the world, the view that used to stretch in front of you diminishes and the space behind you increases.

All this is, of course, part of Rohrer's directorial genius (as later seen in his equally intriguing Sleep is Death game creator. The game reflects our inability to control death in the real world, and the shrinking of hopes and dreams as we approach old age - something matched by the increase of our memories trailing behind us.

The first time my partner died was a real shock. I was left stumbling around the game world, not sure if I should press on or wait for my time to come next to her. It actually moved me to tears, as the realisation hit me that this could well be a decision I would face in real life one day.

Passage, this little game, had created more pf a response in me with pure gameplay than any other game since playing Flower in 2009. I still think about it frequently, and have played it through many times, trying out different approaches. Sometimes playing alone, sometimes joining my partner, sometimes charging ahead and one time where I just stood still.

It actually moved me to tears, as the realisation hit me that this would be a decision I would face in real life.

There are two other games in the package, that intrigue me as well just not to the same extent that passage did.

Gravitation similarly mirrors real life. But it is the life giving power of companionship and play that powers this experience - that's how I interpreted it anyway.

You increase your ability to jump and see the vertical world by spending time playing ball with a friend on the lower levels. You can then jump your way up through a maze of platforms collecting ice blocks until your ability to jump has run out and you must return to recuperate with more play and friendship.

Between is the final game in the set, and slightly different to the other two. It's a two-player game that has to be shared with another DS or DSi before you can play. Both players then sit in separate rooms so that can't communicate with each other.

You then work together in the game to figure out what you're meant to be doing. It's not clear if your worlds are connected, overlapping or interacting with each other in some way. The confusion is part of the experience, but here it really pushes it to its limit.

Rohrer's games push what a game can be beyond our preconceptions. They reminded me of the first time I watched Huckle. It's a Hungarian film with no dialogue or narration, initially it feels like its not a film at all, but as you get used to the form of it a narrative starts to emerge that cleverly plays with the voiceless world and creates as strong a connection with the viewer as any prose heavy movie.

Rohrer's games push what a game can be beyond our preconceptions.

The first time I played Passage was on the iPhone, and I actually thought it was a corrupted download and deleted it. Not till coming back to play it in this DSi-ware anthology did I realise what was going on.

This is where the only tension is in the release. Games like this should surely stand on their own merits, let the player experience them on their own terms and see what happens. The risk that people, like me, may walk away from them confused is surely worth the eventual emotional pay out.

But on the DSi Rohrer includes an explanation of each game. While they don't give everything away there is enough there to make me thing that maybe Nintendo insisted on their inclusion before release.

Either way though, Rohrer's Alt-Play stands out as a very unusual and interesting experience. For some people, I include myself here, it will become quite precious.

You can support Andy by buying Alt-Play Jason Rohrer Anthology