Around the World in 80 Days DS Review

Around the World in 80 Days DS 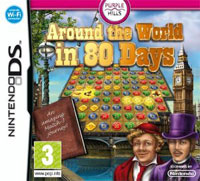 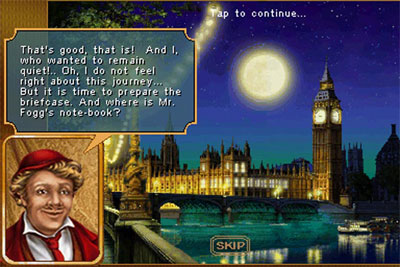 Taking you back to the 19th Century with its times of exploration and discovery, Around the World in 80 Days was a surprisingly challenging puzzle game. Working through 80 days of puzzles was an interesting concept and the early levels were great fun for the kids and me but the game was undone by its unnecessary length and brutal difficulty level.

Around the World in 80 Days for Nintendo DS, follows the tale of Phileas Fogg as he travels across five continents and attempts to traverse the entire globe by solving puzzles. It's an interesting concept and gives the traditional match-3 style of puzzle game a bit more story and flavour than simply working your way through nondescript levels.

The puzzles are simple enough in concept and my kids easily got the hang of playing this game on our new DS XL, shifting the tiles to create matching rows or columns of three. As always there's more to the game than simply matching blocks and blocks of ice, hidden tiles and walls make the process of getting through the levels much more challenging than other games.

The whole interface and the manner of integrating the story with the puzzle was done really well and both my young boys became intrigued with the source material for the game.

Even though that gameplay gets difficult quite quickly the game is really good about easing you into its mechanics with an excellent tutorial and hint system. After only a few minutes we were all happy with what we needed to do and the presentation of the puzzles was nice and clear. In fact the whole interface and the manner of integrating the story with the puzzle was done really well and both my young boys became intrigued with the source material for the game.

The problems we had centred on the difficulty level and the way the game saved our progress. It took us many lives and a lot of effort to get to day 14 only for the game to kick us back to day 9 after we ran out of lives. Having to repeat those 5 days became a real chore and my two sons, who had previously been entranced with the story and puzzles, quickly lost interest. It would have been really helpful if the game had saved after each day - with the puzzles becoming more and more difficult as the days go on I think the game's quite challenging enough - even for a puzzle veteran.

A great remedy for this is the multiplayer that offers three modes across Wi-fi. Co-operative and Time modes were ok but we had the most fun with the head-to-head battles that pitted two players against each other. Just like the rest of the game the winner is the one who clears the board quickest and we had much more fun playing this than beating our heads against the main game's campaign wall.

I have to credit the game with portraying the story of Phileas Fogg in a fun and interesting way to my kids.

Though the time limit in the multiplayer adds the kind of spice that makes the game much more frantic and enjoyable - it does the opposite in the main game. This is the main reason why I found Around the World in 80 Days so difficult to enjoy or recommend. For the first 10 levels it was a great and colourful experience but as we progressed the time limit on the puzzles got more and more unforgiving, sucking the fun out of the game entirely.

I have to credit the game with portraying the story of Phileas Fogg in a fun and interesting way to my kids. As a result of playing this game I now have a copy of Around of the World in 80 Days to read to them at bedtime. It probably wasn't the intention of the DS game to introduce them to classic literature but I'm glad it did.

Around the World in 80 Days for Nintendo DS was a real Jekyll and Hyde experience for all of us in the family. We loved the presentation and implementation of the classic story and the early puzzles. Unfortunately the difficulty level and unnecessary time limits ruined the enjoyable experience of the campaign and we resorted to the multiplayer part of the game to continue the fun.