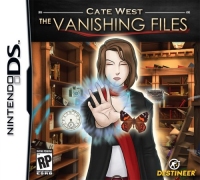 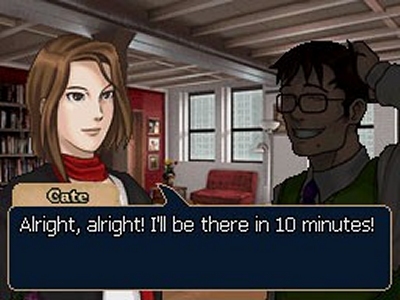 Cate West: The Vanishing Files is an addictive seek-and-find puzzler with an intriguing, mystical story line. Its simple gameplay on the Nintendo DS makes it easy to pick up when you just fancy a quick puzzle, while the storyline draws you on just to find out what happens next.

Cate West is an author with a book signing to get to. After collecting a few items from her house she heads off to the bookshop where she bumps into one of the local police detectives and something strange happens. See, it turns out Cate might very well be psychic, which leads the police to come back later and recruit her help for some particularly difficult cases they've been working on.

Cate's abilities are the vehicle by which you solve various crimes, searching very cluttered pictures for clues from a list, spotting the differences between Cate's 'vision' and the crime scene, using logic to identify the correct suspect given the clues Cate senses from the objects you've found, and then you have to put some of the objects back in the crime scene as you reconstruct the evidence for court.

The strange thing is, though, even while I wanted more than this I was still drawn to complete the next scene.

It's a good variety of gameplay, all coming under the seek-and-find genre, but the sequence is the same for all fifteen cases that make up the storyline. The strange thing is, though, even while I wanted more than this I was still drawn to complete the next scene and find out what was going to happen next!

I won't go into the story too deeply because that would spoil the game for you, but it mixes legend, mystery and religious history into a plot that reminded me of a Dan Brown novel. Now, I know that as a Christian and a minister I'm probably meant to disapprove of it on those grounds, but it was actually pretty interesting and something of an unexpected direction for a game to take.

The pace of play is fairly slow, but that's a good thing in this instance. You get anywhere between fifteen and fifty minutes to complete a puzzle, and there are unlimited hints should you get stuck. I ended up using a load of these, not because I was running out of time but because I'm pretty impatient. The downside of using the hints is that there's a bit of a delay between using one and being able to use the next, and they reduce your final score. I've always found in this kind of game, though, that I want to know the story more than I want a good score, so that didn't bother me too much. I occasionally resorted to just tapping randomly in the hope striking it lucky but got penalised for too many incorrect guesses.

The slow pace did make this a great game to play while the kids were still up and playing about though.

One problem I had with the game was that the length of the puzzles, and the difficulty of finding objects in the pictures meant I couldn't play this one in the car. Staring intently at the screen for that length of time while moving just brought on motion sickness, so this one was strictly for static locations only!

The slow pace did make this a great game to play while the kids were still up and playing about though. I find it really hard to concentrate on more hectic games when my daughter's trying to grab the controller, but she was able to sit on my knee quite happily and have a look at the pictures with me. She's a bit young to actually help, only two years old, but at least I wasn't trying to catch a mushroom or win a race while she prodded the DS!

I found The Vanishing Files to be great for those occasions when I wasn't in the mood for an action game, but did want something to do; times when others would perhaps turn to a crossword or puzzle book instead.

After thinking about it, this is quite a hard game to call. It's the same thing over and over, which should make it boring, but somehow completing each puzzle and having a little more of the story revealed kept me hooked. I wouldn't have given the game a second glance if I'd seen it in a shop, but it's a great little puzzler.

Oh and one more thing mam (to channel Coluimbo), the storyline is left in just the right state for a sequel, so there could be more to come.

You can support Andy by buying Cate West: The Vanishing Files