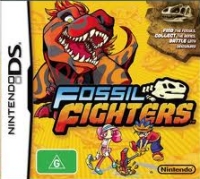 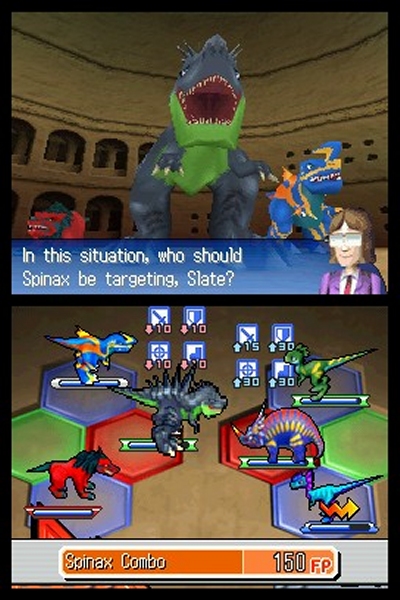 Fossil Fighters DS triangulates the perfect combination of Dinosaurs, Fossil Hunting and card collecting. Our kids had no chance against such a rich vein of play. If you're not in the US, it's well worth importing, compared to the other DS Dinosaur games.

Our kids loved this. Not a big surprise I guess as it combines the two things they seem to love - dinosaurs, and fighting each other.

Fossil Fighters is a role-playing game where you explore an island to locate, clean and collect dinosaur fossils. It's a bit like Pokemon because each of the fossils can transform into dinosaurs that are then used in battles against other dinosaurs.

Our favourite part of the game is the cleaning. If your children have even a passing interest in paleontology or archeology - you'd be surprised, many do - they'll love this. Once you've found a fossil you chip away at the rock using the stylus as a hammer and drill to slowly uncover the bone within. It's a little like those plaster of paris fossil kits that have fossils hidden inside.

The challenge is doing this without damaging the fossil. The more complete the resulting fossil, the stronger the resulting dinosaur will be. We found this both rewarding and frustrating. Some rocks already have parts of the fossil showing, so you must be more careful in those areas. Other rocks are riddled with holes that make the cleaning process feel like surgery.

The DS's touch screen is perfect for this task. A great little touch is that your drill creates dust making it difficult to see what you're doing. My kids were getting frustrated with this as it makes it hard to see what you are doing. "Why not try blowing?" I suggested, to be met with howls of pleasure when their little puffs of air where picked up by the DS microphone and blew away the dust. Magical!

There were howls of pleasure when their little puffs of air where picked up by the DS microphone and blew away the dust.

Different fossils contribute to the strength of the resulting creature. You need to locate different fossilized bones to increase the performance of a particular Dino. You need the head to create them in the first place, finding the body, arms and legs will increase its fighting power.

The reason you collect the dinosaurs is for the battles. Leaving aside the slightly questionable ethics of keeping animals for pit-fights - these crop up in different ways. Sometime when you dig something up another fighter claims it to be theirs. You get out your pack of Dinos and take turns unleashing a variety of attacks.

There is quite a bit of strategy involved here as the different dinosaurs perform differently against different enemies. You need to bring the right three to battle if you want to win. If you win, your Dinos get stronger. If you lose, you simply end up back in town and you try the same thing again.

You could put dinosaurs on anything and they would love it. A tactic we've been using for their toothbrush.

While the fights were fun, for our kids at least, it was the collecting and cleaning aspect of the game that kept them transfixed. That said I think you could put dinosaurs on anything and they would love it. A tactic we've been using for their toothbrush and reward charts.

You can support Andy by buying Fossil Fighters