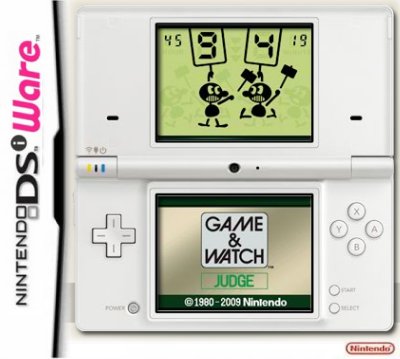 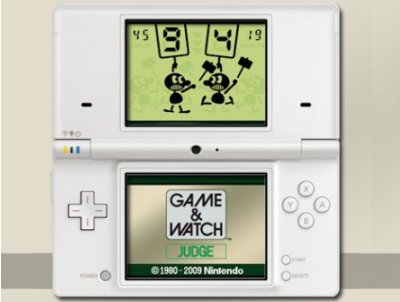 Game and Watch Judge is video game snap. This is risk-reward rhythm action perfection - do you play cautiously, or go for the big points by getting your hit in early. For those that remember the original 80s hardawre this is not only great fun, but a nostalgic encounter.

Game and Watch games are an original Nintendo game product from the 1980s. Each Game and Watch title provided one simple game to be played on an LCD screen, as well as a clock and an alarm. I remember them as the games I used to play in the playground at school through my primary school summers.

Although such old games may seem out of date, their return as downloadable DSi-Ware games couldn't be timelier. Games are returning to this very simple pick up and play style that Nintendo popularised with these devices. Not only that but many famous plumbers (Mario) and adventurers (Zelda) began life in liquid crystal grey on these super simple addictive experiences.

Judge is a reaction game. Each round begins with a count down, before a number is revealed for each player. You then have a split second to decide whether you attack or dodge. You can only successfully attack if you have the highest number.

It's like snap, but the scoring incentivises you to go on the offensive.

Rather than Game B being a harder version of Game A, here is offers a two-player version. Rather than playing against the computer you play against each other. One player uses the d-pad with the other using the buttons. It works really well, and taps into what we have more recently enjoyed in the Wario Ware games - simplicity and addiction.

There are some admissions to modern gaming. You can pause the action by pressing start or closing the DSi lid. You can also start the game from a score you have previously achieved - although this won't count for the high score table it's a nice way to practice.

Judge is a great game for one, and hugely entertaining for two - particularly for families. Our kids (3,6 and 8) could all join in the fun - in fact they seemed to have better reactions that Mum and Dad. Add to this the retro-cool quality and you have something that is really appealing. For just 200 Points on the DSi-Ware store it will keep any family entertained for hours.

You can support Andy by buying Game and Watch Judge