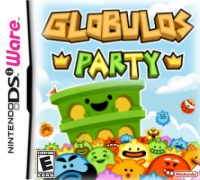 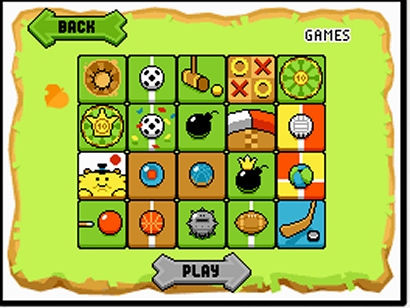 Globulos Party brings its spherical creature based minigames from the browser to DSi-Ware. Personality and simplicity delight younger players while the multiplayer modes court interest from the rest of the family.

While Globulos Party lacks the fidelity of Peggle, there is the same level of personality. Playing each game taking charge of these cheery round animals - the Globz - didn't really make sense until I put it in the hands of my daughter. She loved picking and dressing up her own little Globz alien and was keen to start playing with him in the various games.

What to me seemed a little limited and simplistic, to her created a world of little games where she could interact with these cyber-pet-like friends.

Globulos Party puts these little guys (and I imagine, girls) to work in a wide variety of games. Each of these involve using the stylus to project them at each other to either score points or knock them out. Games range from the familiar Pool, Football and Croquet type affairs to the more unusual challenges like knocking the other player into a pit, or attacking a particular target.

My daughter loved it when the little Globz would grin, cry or laugh. The idea that her playing pieces were staring back at her created a strong connection with the game. She would shriek with laughter when one of them did something unusual or funny. It's an idea that goes back to Jimmy White's Whirlwind Snooker in the days of the Amiga, where then as now the balls would pull faces to try and put you off your stride.

Such was her enthusiasm that I grabbed the DSi for a go after she was in bed. Although I enjoyed the novelty too, and did my best not to shriek too loud, the computer play was a little limiting. Rather than feeling like I was playing like a real opponent, I could quickly spot the patterns and it soon became a mechanical task of winning or loosing.

She would shriek with laughter when one of them did something unusual or funny.

Luckily then, we have a couple of DSi's in our household. Playing against my wife with the DS Download Play mode was much more of a challenge as we each tried to out-sneaky each other. If you don't have two handhelds you can use a turn taking two player mode which although is a little slower is still good fun while watching TV of an evening.

Globulos Party makes the transition to the DSi-Ware well, party from the well designed interface and concept, but also because it's such a good fit for the DSi's younger demographic. As a young player's sport game it is surprisingly convincing. Add in a second player and the rest of the family will enjoy it as well.

You can support Andy by buying Globulos