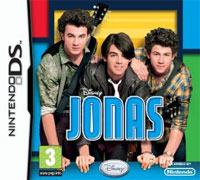 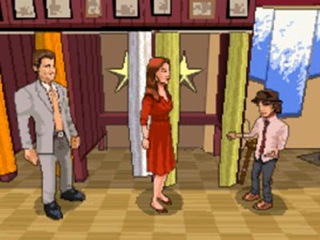 Jonas DS leans heavily on starry eyed youngsters to see past its shortcomings. Those that can't get enough of the show will find plenty to extend the experience here. But other, less obsessed with the franchise, will probably prefer the TV show alone.

It's the type of Disney boy band tie-in that should really appeal to my young daughter. But even her adoration of the Jonas brothers was stretched to breaking point with this poorly designed DS game. She found guiding the brothers through six episodes of their sit-com tedious and it lacked any of the aspects that made the Disney Channel Jonas show remotely interesting.

Using the same premise as the TV show, Jonas for the Nintendo DS lets players control the brothers in six episodes from the Sit-Com and play a variety of mini-games within the levels. This set-up was exactly what my daughter was after as she's such a fan of Disney's latest tween sensation and she couldn't wait to dive straight into the game once we brought it home from the store.

Almost instantly her dreams were squashed by the awkward stylus controls and the poor fidelity of the touch screen interface. She would constantly find that the game required her to be absolutely precise on every occasion and she frequently found the game doing stuff she never intended to happen.

I saw my daughter spend far too long just running about the game world trying to get fans to follow her rather than playing anything that looked remotely interesting.

On these occasions I usually step in and find out it's her clumsy stylus work being the culprit and that a defter touch is all that's needed to alleviate the problem. But this time even I found myself shifting clothes around and grabbing boxes in the levels I didn't intend to interact with. Even shifting over to another DS resulted in the same problem so it seemed a problem with the game rather than our hardware.

Nevertheless, each of these episodes involved similar storylines and seemed to devolve into an excuse to dress the brothers up if different outfits - for supposedly hilarious consequences. In-between the dressing up parts the game requires you to acquire gold hearts to complete the levels. These are obtained by getting rabid fans reading to rip your clothes off before hitting them with a Jonas guitar riff power. Apart from sounding utterly ridiculous and a little creepy, the actual mechanic to make this work looked awkward and frustrating to implement.

I saw my daughter spend far too long just running about the game world trying to get fans to follow her rather than playing anything that looked remotely interesting. The dull nature of the game also translated to the visuals and every single episode seemed to look exactly the same. Whether the episode was based at school or school. The game is broken up with the inclusion of a few mini-games and the opportunity to play along to a few of Jonas' songs. These came as a relief to the repetitive level design but the quality both in terms of game play and audio left a lot to be desired.

Yet the biggest problem was simply the premise behind all of the game. Each episode was full of awful dialogue and badly designed scenarios.

Yet the biggest problem was simply the premise behind all of the game. Each episode was full of awful dialogue and badly designed scenarios. One included the brothers accidentally wiping films of their childhood and coming to the conclusion that dressing up in the same clothes and re-filming those videos would be fun. Simply ghastly.

Whilst simultaneously stopping myself from vomiting at the stupidity of the premise and keeping my brain from shutting down in protest, I saw that my daughter was similarly aghast at what was going on. 'Daddy' she said, 'what's the point?' A question that I struggled to answer honestly.

The major difference between this game and the real show is the personality (if you can call it that) of the Jonas brother's comes through on the TV in a way it never would on the DS. As such the experience becomes a stilted an awkward mess, with nothing to obscure the badly written dialogue and awful narrative.

Maybe if your daughter is a rabid fan of the Jonas brother then this might not matter, but even my own daughter returned to watching the actual shows rather than continue playing this DS game which seems to do a good job of sullying the Jonas name. With the repetitive game play and visuals combining with awful narrative there's nothing to recommend in this game whatsoever.

You can support Andy by buying Jonas