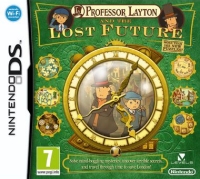 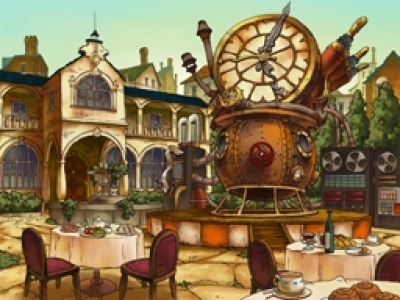 Professor Layton and the Unwound Future masterfully combines storytelling and puzzles. As much a short film as a game, Layton's charm continues to win him friends in our family.

Professor Layton is still popular in our house. This may not sound all that surprising, but in a family where gaming brands are forgotten with as much vigour as they were initially obsessed over, Layton's staying power is becoming quite unusual.

Having enjoyed the Curious Village and Pandora's Box I thought the story telling and puzzle combination may have started to wear a little thin. But no, my wife and kids were eager to huddle round our new DSi XL to play together - once I got round to telling them we had it.

Professor Layton and the Unwound Future offers a time travelling tale. This not only creates the possibility of all sort of surprising and intertwined plot points but also frames a number of the puzzles with time bending logic.

I've never really spent much time with the Layton games before - partly because they were monopolised by everyone else in the family, but I'd also never really quite 'got' what made them so compelling. I'm really not a big fan of minigame collections.

This time though, before I let the others know we had it in the house I decided to spend a couple of late nights playing through its puzzles.

I hadn't realised was that this is as much a cartoon as it is a puzzle game.

What I hadn't realised was that this is as much a cartoon as it is a puzzle game. It reminded me of shows like the Cities of Gold or Dogtanian and the Three Muskehounds (ed: dam you now I'll have those themes in my head all day). But unlike those after school cartoons, Layton offers a slower and more considered tale that's more mystery-thriller than action-adventure.

The other half of the Layton equation - as I discovered - is the well balanced puzzles. Each one relates to the story and must be solved before you can progress. If you get really stuck you can use one of your three hint coins - but this diminishes how many points you get when you do solve it.

A few hours in and it all started to clicked. In fact, before I knew it it had been a good week of late night play before I finally got round to sharing it with the family.

Layton offers something unusual for a videogame - charm. It's not so much the constituent parts that make it so compelling, but the way they have been combined and dressed. They come together to create a coherent whole that offers both quality and intrigue.

They come together to create a coherent whole that offers both quality and intrigue.

There are of course times when it frustrates, and because of the nature of logic problems the difficulty can be a little lumpy, but this doesn't undermine its overriding enjoyment. Being a family of five, we would also have liked another couple of save slots - but this really is grasping at critical straws.

Although our youngest is not quite up to working through the game on their own, we found playing together worked well. Partly to get around the limited saves we assign one of them to be a Family slot. We then use this one to play through the game as a group - taking advantage of the DSi XL's bigger screen and wider viewing angle.

When there was no one else available to play though, he was happy to discover the minigames. The Picture Book game was a particular hit. This lets the player to place the stickers, won in the main game, into a story book. This creates a unique story each time as the book adjusts to the chosen images. My son would come home from school straight to the DS - hoping that my wife had been playing it during the day - to see if there were any more stickers available.

It's taken me three releases to catch up with the Layton craze but I'm glad I did.

There's some debate in our house about which of the Layton games we have enjoyed the most. The later games, like the Lost Future and Pandora's Box do a better job of interweaving the story and the game play, but the earlier games like the Curious Village were our first encounter with Layton and so remain something special.

It's taken me three releases to catch up with the Layton craze but I'm glad I did. More than just being a family friendly puzzle game, there is something of considerable substance and style here for any gamer. In fact the quality of the story telling and difficulty of some puzzles felt more like playing Uncharted than something on a Nintendo console.