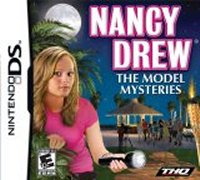 Nancy Drew: The Model Mysteries DS turns us into the teen sleuths with a casual experience that leans heavily on its Nancy Drew kudos. Despite my daughter being a big fan of the previous games, The Model Mysteries turned out to be a little thinly-drawn for her. That said she still wanted to finish the game for the Nancy Drew story element if nothing else.

Nancy Drew: The Model Mysteries is based on the Nancy Drew trilogy - Model Crime, Model Menace and Model Suspect, we join her as she investigates the near-poisoning of her friends fiancee at their wedding. With my daughter being such a fan of these games and the books I had high hopes that she would enjoy this new game just as much as the previous ones. Sadly the series appears to have taken a step back and The Model Mysteries doesn't offer anywhere near the same amount of interaction and variety that made those investigation-led experiences a lot of fun.

We were disappointed to see that the game had resorted to a series of loosely-related mini-games that were sandwiched between suspect interrogations. It gave the impression we were solving a mystery but as the mini-games were so weak it really dragged the experience down into a very lightweight title that we've not come to expect from Nancy Drew. These mini-games consisted of spot the difference, word scramble and timed search and find puzzles - none of which felt particularly investigation-like. What made it worse was the inclusion of odd mini-games like a swimming simulator that bore little resemblance to the plot and was never very interesting to play.

It retains that Nancy Drew vibe that my daughter loves and she played it to its conclusion.

My daughter was really disappointed by the way the game played out and even the interrogation segments didn't make up for these shortcomings. As my daughter handed the DS to me I saw that these suspect interviews consisted of asking just three questions either at a one to three different suspects. It looked fine, if a little simplistic at first, but the game requires that you ask the right questions each time and then at the end of the chapter accuse the correct suspect or face the prospect of replaying the entire chapter. There's nothing worse than having to brute-force your way through an adventure game like this without being able to stretch those little grey cells and instead getting very frustrated.

My daughter was willing to tolerate these problems because she's such a fan of the source material but even her devotion to the series was tested by some of the decisions taken in this game. Having said all that it still retains that Nancy Drew vibe that my daughter loves and she played it to its conclusion, but I can't see anyone picking this up and being as interested as she was with the previous games in the series.

The simplistic puzzles are at the right level.

One very minor concern is the difference between the box art and the appearance of Nancy herself in the game. Having a cover model without glasses whilst the in-game depiction clearly shows Nancy wearing black spectacles is a little sour to me. Am I to assume that a girl wearing glasses is not a suitable image THQ want for their game? It's a bizarre issue that my daughter picked up on because she wears glasses too and I was at a loss to explain why.

On reflection I can see that this version of Nancy Drew: The Model Mysteries for the Nintendo DS might be aimed at much younger players that my daughter. In that case the simplistic puzzles are at the right level but it still leaves the interrogation sections as an irritating miss-step that will surely put more players off than entice them into the world of Nancy Drew.

You can support Andy by buying Nancy Drew: The Model Mysteries