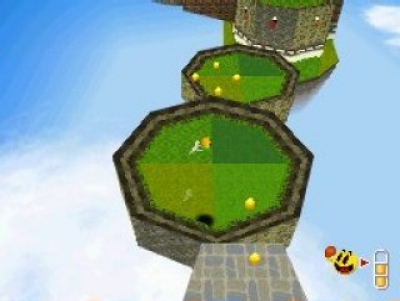 Pac 'n Roll isn't just a solid reworking of Pac-man for the DS, its stylus controls make it perfect for families beginning their gaming journey.

As I discussed previously, good games for younger players can sometimes be found in the most unexpected of places -- although with a little family gaming know how tracking these down becomes less of a mystery.

Another game that follows the same reasoning as my Wipeout HD recommendation is Pac 'n Roll. Like the PlayStation racing game this is essentially a hardcore platform puzzle game, but suits beginners because of its flexible controls, straight forward level design and colourful visuals.

Pac 'n Roll, for those that don't remember, came out in the early days of the DS, while both press and public were making up their mind about Nintendo's odd-shaped handheld. Pac 'n Roll, along with sister release Pac Pix, was the first sign of third party developers taking advantage of the DS format -- both dual screen layout and touch screen controls.

I first enjoyed the game as an early adopter of the DS, and appreciated its uniqueness. It's a game that at the time simply wouldn't have worked on another platform without the DS specific interactions (although now a iPhone or iPad port would certainly be interesting). The touch-screen controls were direct and responsive and the two screens meant that your stylus wasn't obscuring the action.

It wasn't until a few years later, when my daughter (3) started to take an interested in these devices I spend too much time staring at, that I realised how good it was for her as well. I say realised, in fact it was her who made the discovery. She pestered me to have a go on "daddy's flashing wallet" as she called it, until eventually I gave in -- expecting her to get as frustrated with it as she had been with other games.

With Pac 'n Roll the reverse happened. Rather than getting more and more frustrated, for a good twenty minutes she was fascinated by it. I let her work out how it worked for herself and she had soon made the connection between top and bottom screens -- flicking the stylus on the bottom screen sends the spherical Pac-Man off in that direction on the top screen. She even worked out that to stop she could just hold her pen (or finger) on the bottom screen and apply Pac's breaks.

She relished playing them over and over again.

This was night and day compared to her frustrations with the D-Pad controlled Mario Kart and before the time of the tilt controlled Wii version that she later go on well with. Over the next few weeks, with a just a little help from me, she worked her way through the first few levels. In fact she relished playing them over and over again, searching every last corner and jumping with joy when she found hidden gems or power-ups.

Again, like any good family game, Pac 'n Roll was a title I wanted to play too. For more experienced gamers it offers a genuine challenge that expands upon the unusual experience in imaginative and unexpected ways. It hooked into my love of Trackball controlled arcade games like Marble Madness and Crystal Castles, but here as well as that fine control over direction you could also stop when you wanted by holding down the stylus.

Beyond the novel controls and premise there are other nice touches. About halfway through you can unlock a full Pac-Man game that is then available to play in its own right. I must admit to getting waylaid revisiting old Pac-Man tactics for some time.

Back in the main game you need to negotiate various platforming puzzles through both planning and dexterity. The control scheme works well for these and encourages the use of momentum and speed rather than pixel perfect timing.

Another accidental hit with the young players in my household.

There are of course, this being Pac-Man, ghosts that try and capture you. If you are caught you have to frantically tap on them as they flail about on the touch screen. When my daughter was playing she would hand me the DS for me to free her from their grasp, and it should be said that this will be one hurdle too many for very young players.

While these aspects of the game are a reminder that Pac 'n Roll was not designed with the very young in mind, there are more than enough accessible elements of the game to make it another accidental hit with the young players in my household.

Once they had come to the end of their abilities, the kids seemed to be content with watching me finish the later levels. As anyone who cut their teeth playing Arcade games will tell you, the only thing better than beating them is doing it with an audience.

You can support Andy by buying Pac n Roll