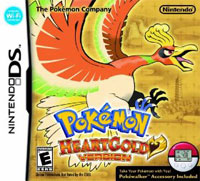 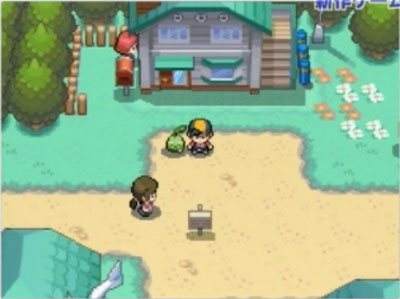 Pokemon HeartGold/SoulSilver is a remake of the old Gold and Silver Gameboy games for the Nintendo DS. As well as improved visuals and DS interactions it offers a fresh story and an unusual killer feature - the PokeWalker. The whole package offers a level of interaction that quickly became a family favourite.

The little pedometer that comes with Pokemon HeartGold/SoulSilver may not appear revolutionary at first. In fact, it didn't interest my son in the slightest - although as I rapidly approach middle-age, it offered me a way of combining videogames with exercise that didn't involve standing on a plastic balance board.

However, this addition changed the way we played this game as a family. As big Pokemon fans I'd bought both editions of the game in order that we could play it at the same time, trade Pokemon and face off against each other in battle.

I remembered playing the original Gold for the Gameboy but luckily time has eroded my memories enough so none of that knowledge made it feel like I was re-treading the same path.

Well, actually that doesn't really matter as the difference between Pokemon games is pretty small if you're a casual player such as myself. After playing Platinum last year I found the mechanics and story to be largely similar.

There's a level of child-like obsession that rekindles itself when you play one of these games and you revert back to being ten years old.

My son gladly took the opportunity to dive back into the Pokemon world and start collecting the little critters all over again. Despite my initial concern that this would be a simple rehash I was soon sucked into the land of Johto. There's a level of child-like obsession that rekindles itself when you play one of these games and you revert back to being ten years old, compulsively working your way through the game and forming a kick-ass team.

You can almost see the fascination and devotion forming in him as he starts to understand different strategies. It's heartwarming to see and although you can criticise the game for being overly-kitsch and not very deep narrative-wise, it still surprises with how complex all the RPG trappings can become.

None of that matters to my son and I as the simple process of working through the Johto Region, collecting Pokemon, Obtaining the Gym badges and beating the Elite 4 is reward enough for playing. But what changed HeartGold/SoulSilver from a mere Pokemon iteration into a revolution was the PokeWalker.

You can almost see the fascination and devotion forming in my son as he starts to understand different strategies.

With this little device you can transfer a single Pokemon over from your game and carry it around with you. The little screen will show the character and you can even battle and catch other Pokemon on the move to take back to your main game later. The neat trick here is that every step you take charges up the PokeWalker with Watts. These can then be used to find new items or attempt to capture other creatures.

Once you return your Pokemon to your DS it shows you a short vignette of what it did during its 'stroll' with you. This cute feature is what started to get my son's attention when I would come home from work and it led to a new arrangement of how he would play the game.

In the morning I would take one of his precious Pokemon out with me to work and by the time I came home it would have a bunch of items and new critters for my son to play with. Depending on how much I'd walked, the process would also level up the Pokemon and we found it easy to raise the level of his whole team within a few weeks.

I was amazed with how much fun I was having just using the PokeWalker. Very quickly my copy of HeartGold was collecting dust whereas my son's SoulSilver was getting worn out through overuse. I also found myself actively seeking out opportunities to walk inside of drive in order to level up Pokemon quicker. Just a simple device like this bizarrely turned my videogame hobby into a fitness drive in order to get better at the game!

By the time I came home it would have a bunch of items and new critters for my son to play with.

Soon I was happy to persuade my son to do the same and the thrill of taking out a Pokemon with him to school made the whole experience of HeartGold/SoulSilver much bigger than just the DS game. I really hope the Pokemon series continues to evolve in this way and allows the use of the PokeWalker in later games. It not only made this remake into a new experience but also expanded what games could do generally. Pokemon HeartGold/SoulSilver for the Nintendo DS might just be the most amazing game I've never played - all because I was too busy using the PokeWalker accessory. There's not many occasions when you can say that about Nintendo's hardware accessories!

You can support Andy by buying Pokemon HeartGold SoulSilver