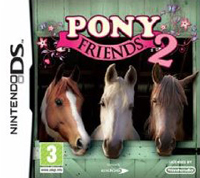 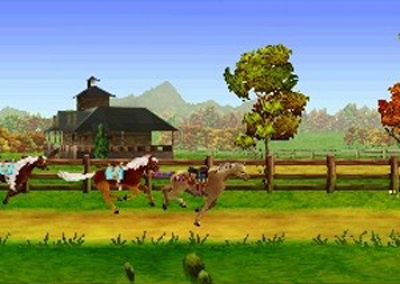 Pony Friends 2 for Nintendo DS continues the successful formula that made the first game such a hit with my kids and allowed them to create or adopt their own personal Pony. They had great fun taking care of their special friend and taking part in all the activities and races they could find. Though it didn't appear particular deep or expansive to me, both my kids were fully engrossed in every aspect of this game from grooming to accessorising their faithful friend.

Starting off with a gentle introduction to the controls and the places you can visit I was struck with the quality of the 3D visuals and how easy it was to ride by using the stylus. By simply placing the stylus on the screen near the pony's neck and moving it up and down the game moves you forward at a brisk canter. My daughter picked it up immediately and was soon turning round, jumping over logs and even taking photos of interesting wildlife with ease.

There's also a good range of events to take part in but the most important part of Pony Friends 2 is caring for your steed after each of these events. Here you groom their coat, maintain their hooves and feed them - you can also use the DS' microphone to communicate with your pony although I found that it was either too sensitive or not registering voices well enough to be useful in this instance.

More effective was shouting encouragement at your pony when you're in an actual race. This little mechanic was excellent fun at first and seemed to make a difference between winning and losing to many of the races. Eventually the constant shouting during each race got incredibly annoying and I had to put a stop to it - I don't need games giving my kids anymore encouragement to shout!

You can only have one save active at a time which is troublesome if you have more than one child that wants to play the game.

Money can also be spent on a ton of collectable content to accessorise your pony. This was probably my daughter’s ultimate goal as I always saw her on this screen obtaining a near-endless variety of decorations or saddle-gear for her pony. I noticed that some even gave her a hardiness or happiness boost if worn - a nice little touch that added a bit of strategy into the game even if it was very lightweight.

The biggest gripe I had with the game was the lack of a multiple save slot. You can only have one save active at a time which is troublesome if you have more than one child that wants to play the game. This did prove troublesome and the only solution is to buy another version of the game or attempt to get yond children to share. I'll let you guess which one turned out the easier.

the manner with which you build a relationship with your pony by grooming, petting and feeding is all reminiscent of Nintendogs

But the manner with which you build a relationship with your pony by grooming, petting and feeding is all reminiscent of Nintendogs and makes for Pony Friends 2 strongest attribute. There's enough range and variety of accessories that had my kids endlessly customising their pony and got them attached to their own creation in the same way Nintendogs had done before.

Neither of my children really got into the multiplayer side of the game so I can't speak for the trading feature. But they both loved the game so much that I'm considering getting it for the Wii as well which has multiplayer races and trick competitions. Not because they particularly want it (though I'm sure they do) but because I'm curious myself to see what it's like.

Pony Friends 2 for the Nintendo DS is an excellent Pony simulator for young kids and I know my two children loved almost every moment they spent with the game. It looks great, the controls are easy to pick up and the depth found with the collectables and the variety of racing was surprisingly engaging.

You can support Andy by buying Pony Friends 2