The Princess and the Frog DS Review

The Princess and the Frog DS 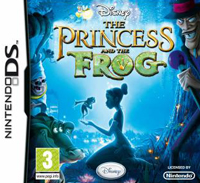 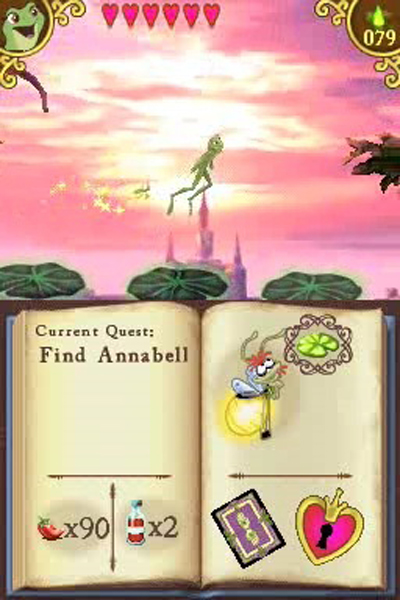 The Princess and the Frog for Nintendo DS works the Disney film into a classic platformer that successfully captures the look and feel of the movie. Unfortunately its clean presentation belies an experience that my kids struggled to engage with.

Just as the new Disney film The Princess and the Frog goes back to the classic hand-drawn animation of the past, this DS film tie-in goes back in time to when movie games were all about needless platforming and pointless item collecting. That isn't to say those types of games aren't worth playing as the addictive nature of them kept me playing when I was a kid, even when I knew it was a pointless exercise.

This is just the type of game The Princess and the Frog replicates with its moving platforms and collectables strewn liberally around the environments. My kids loved the setting of the game as it takes place in the middle of the film during one of their favourite sections (the tri-jazz part). It was due to the fact that they had recently watched the film that the game came across as interesting in the beginning.

The best part of the game was the platform sections.

The actual gameplay is a mixture of platform jumping and a collection of very brief mini-games - the staple for nearly every film or TV tie-in DS game. There's a jazz game which turns into a freeform noise-making application which grated terribly on my ears thanks to the poor quality of the music. The cooking game was a bit more fun with my kids having to add certain ingredients into a pot, stirring it at the right time to keep cooking and eventually making a number of different meals. Unfortunately this process never alters regardless of what meal you’re cooking and leads to some odd recipes (like corn bread) that really shouldn't be made in a big pot.

This kind of inconsistency might make me annoyed but my kids didn't seem to mind too much. What got to them was how repetitive the mini-games became after only a short time. Even swapping the DS between all three of us didn't ease the boredom and we were all thankful when these passages of play were over.

The best part of the game was the platform sections and it’s here that you take control of Ray, the lightning bug. Instead of just jumping around willy-nilly I found you had to transform the enemies into useful objects, like platforms or springs to progress in the world. It looked like a neat idea and once my kids had got the hang of the controls they found this part of the game quite rewarding. The collectables unlocking at certain times felt a little off to me and I noticed that one of my eldest son was spending a lot of time going back and forth within one small level just to collect everything. The problem was that he didn't seem to be enjoying this process at all - a long way from the old-school games this film tie-in is trying to replicate.

I liked the idea of this giving some of the Disney games a little more weight or point to playing them and my kids signed up straight away.

The other addition to the game is DGamer - an online community exclusively for Disney games and gamers. This enables you to customise a unique 3D avatar, have a personal profile, chat with friends and unlock other Disney content. I liked the idea of this giving some of the Disney games a little more weight or point to playing them and my kids signed up straight away. But in truth they spent very little time with this feature so maybe it'll be something they come back to in the future.

Even though my boys are great fans of the film when I asked if they would recommend this game to anyone else they said no. It seems far too repetitive to be interesting to play and some aspects of the platforming seem too tricky or arbitrary to be enjoyable. Even if you're a fan of the movie you are probably better off opting to spend the money on the DVD instead.

You can support Andy by buying The Princess and the Frog