Other GamePeople columnists have reviewed this from their perspective - huh?:
Frugal Gamer (DS) 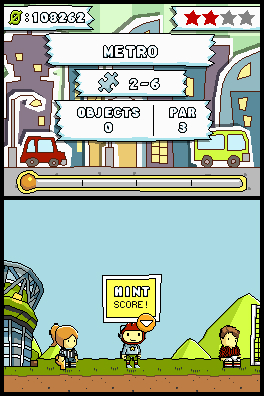 Scribblenauts was a game I initially thought would suit me and my playing style. The premise of a platforming puzzle game that lets you put any object into its world and solve problems in a variety of ways sounded the experience I would love chipping away at during the quiet evenings when the children are in bed. But Scribblenauts conspired to turn this incredible concept into a frustration-filled nightmare with broken and useless controls doing everything to get in the way of any fun. But once I found my son playing it without any preset expectations or boundaries, I suddenly found myself using it in an unexpected and awesome way. Instead of sticking to the pre-conceived levels we used Scribblenauts as a learning platform and the game transformed from awkward platformer to a tremendous and unique educational tool.

By all accounts Scribblenauts looks like a game for kids. The main protagonist is a cheery looking guy on the front box and the art style of the game is akin to a children's drawing. This was certainly drawn out by the tutorial which I found to be patronising and overly verbose about telling you what to do and not letting me get into the game quick enough. But once I got past the first few levels its simple puzzles began to illustrate what an amazing concept this game operates under. Even the most simple task, such as rescuing a cat from the top of a house, has a variety of ways in which to be solved. I could type in 'Fire Engine' and the Fire service would come by and pick up the cat, or I could type in 'ladder' myself and climb up that way. Or I could go off the deep and disturbing end and set fire to the house, causing the cat to jump down safely into its owner's arms.

As soon as the levels began to get a bit more complex or challenging the game's controls began to fall apart.

I could go on but this illustrates what a magical little game Scribblenauts had become in the first few minutes. I found myself taking a lot of time going through the first few worlds, consisting of eleven puzzle and action levels each, and replaying them just to exercise my brain power a little more. It was more a case of me, the gamer, making the game longer and more interesting as I was prepared to invest the effort rather than let the game push me in any direction.

But this gaming nirvana soon started to show cracks. As soon as the levels began to get a bit more complex or challenging the game's controls began to fall apart. Controlling our main guy by tapping the screen with the stylus rather than the D-pad turned into a frustrating battle with overly responsive jumping. Or I was fighting the interactions between the objects as they never did what I was expecting. I could never get Maxwell to do exactly what I wanted at the critical time. When you play through the same level several times knowing how to solve it but are constantly thwarted by the wretched controls, it can lead to some big anger management problems. I never threw my DS out of frustration, but I came mightily close on a few occasions and the stylus itself was flung out into the garden on a regular basis.

And this is where I was going to leave Scribblenauts; to gather dust on my shelf whilst I went back to Mario Kart with my son or involved myself in a deep RPG instead. But then I found my son playing it one morning and the game suddenly changed into a very different experience indeed. Because he's barely three years old and the controls are a little different than Super Mario World or Yoshi's Island, he couldn't get into the real levels. Instead, he stayed on the title screen which serves as a general canvas for whatever you want to type in and manifest into the world.

Suddenly the game had gone from being a potentially awesome platformer with horrendous controls, to being an amazing educational tool to help my son spell.

To my surprise and delight he managed to spell out the word 'Cat' (well, close enough anyway) and plonk several felines onto the screen so they skulked around and meowed all in unison. Suddenly the game had gone from being a potentially awesome platformer with horrendous controls, to being an amazing educational tool to help my son spell. I know there are specialist games, books and toys that perform this role exclusively, but having something so fun and natural, like Scribblenauts, to teach him was unexpectedly brilliant.

Soon we had created a whole farm of animals on the screen and he slowly started to get the hang of spelling the worlds out. Admittedly I was doing most of the stylus work in typing the names out, but the very fact we were using Scribblenauts as a learning medium speaks to how much creativity can be harnessed by the game. This is its greatest aspect - the open nature of the game mechanics means it can be as unique and entertaining as we chose to make it. Play it as a straight puzzle/platformer, as I wanted to in the beginning, then the problems start to ruin the game. I hadn't intended Scribblenauts for the DS to end up being the educational tool it did, but the way my son and I got much more out of it together - turns out it was a kids game after all, and I was all the more happier for finding that out.

You can support Andy by buying Scribblenauts