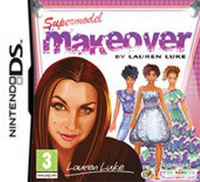 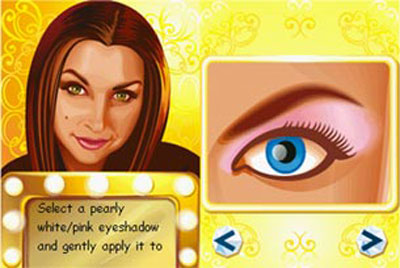 Supermodel Makeover DS has you in fashion contests and stretching your creative muscle a cute freestyle mode. With supermodel style advisor Lauren Luke offering expert tutorials my daughter found this to be the best make-up and fashion available on the DS.

There's no doubt that Lauren Luke is the only reason why my daughter picked this game - particularly as she has been unimpressed with make-up games in the past. Apparently the presence of a national superstar make all the difference as my daughter hasn't stopped playing Supermodel Makeover after a week of constant use.

At first glance it appears nothing more than a collection of tutorials letting you experiment with different styles of make-up and fashion. But the two Contest and Freestyle modes give Supermodel Makeover a distinct structure that channels those minigames into a larger challenge.

Contest and Freestyle modes give Supermodel Makeover a distinct structure that channels those minigames into a larger challenge.

Like other Nintendo DS games, the visuals are unimpressive. When I asked my daughter about this she disagreed. Although it looks as far removed from reality as possible this cartoon-ish and stylised way of depicting people seemed to fire her imagination more than photo-realistic graphics.

Supermodel Makeover has enough fidelity to have a detailed grading system and challenges that focus on creating a look to impress three judges. This is the fashion equivalent of Pop Idol and it requires knowledge of make-up, clothing and accessories in order to succeed. Each of the ten contests is made up of those three sections and you have to bring all three of these together to the catwalk in order to be judged a success.

This section of the game offered the most interest and I found my daughter taking these seriously in order to progress through all ten contests. Successful completion unlocks new tutorials and items and she found taking these unlocks into the freestyle area of the game the most rewarding. This mode allowed her to experiment rather than be restricted by a set of rules and she ended up creating some fantastic and stylish looks as well as some hilarious mistakes that were pretty entertaining.

In the end it was the presence of Lauren Luke in virtual form that kept her playing.

In the end it was the presence of Lauren Luke in virtual form that kept my her playing. Unlocking the tutorials from the supermodel was a great feature and having her as one of the three judges on the contest mode was a stroke of genius. My daughter explained that a lot of the make-up and fashion games lack any kind of personality and offer nothing more than a dull sandbox to play make-up games with little or no point. Supermodel Makeover, although having a lot of the games flaws may of these games have, gets around it by putting a recognisable icon into the game in such an involving way.

Supermodel Makeover was a great fit for my six year old daughter and she enjoyed many hours of play. Although I wasn't sure of this young player and supermodel mix, the game's cartoon visuals and sensible approach avoid any unhealthy associations. The personality and competitive nature of the Contest mode gives Supermodel Makeover a far more game-like feel than other inferior titles.

You can support Andy by buying Supermodel Makeover