The World Ends with You DS Review

The World Ends with You DS 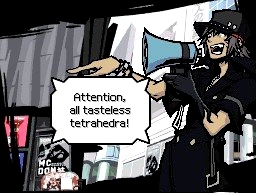 The World Ends with You rewrites the gaming rulebook, crosses boundaries and mixes cultures. Obviously determined from its inception to be something different, the result is happily an highly enjoyable and varied experience. Ironically though, its hard-to-communicate play style and indie visuals make it more a game for critical acclaim than retail success.

Every so often a game comes along that doesn't fall into the usual set of genres. Either it cuts an entirely new path or is a new combination of styles. The World Ends with You is most definitely one of these, and falls into the latter category. The jury is still out on exactly how we should classify this tricky little game from Square Enix, but our best stab at it would be a rhythm-action role-play game (RPG).

The game first strikes an RPG chord as you dig into a fare amount of exploration, character development, collecting magic emblem pins and generally developing your character's abilities. But once you hit the battles the other element of the game comes into play, the rhythm action mechanic. Perhaps the greatest achievement of The World Ends with You is its ability to walk the tightrope between these two genres. Its production values, setting and story-telling all convince that this is a genuine RPG experience, but the interface, music and battle sequences are straight out of the rhythm action playbook. What could so easily have turned out to be a hotchpotch of ideas turns into a coherent experience.

This is most likely to be a game for the older kids in the family, rather than those just starting out. I found the variety of play styles does however make it appealing to both boys and girls.

While I would normally be suspicious of cross over games such as this, it really does work very well. Because it genuinely services both camps, the developers can draw on fans of either genre. This is often a benefit in a family setting as one game can keep two kids happy for half the price - the only challenge then is how to adjudicate who gets to play when.

Unusual combinations such as this seem to be something the DS excels at. Just a year ago I was playing another game based on an equally ill-advised tapestry of styles - Puzzle Quest. That game brought together RPG and puzzle play styles, managing to accrue not only critical acclaim but good numbers in stores as well.

Although The World Ends with You easily manages to convince with its mechanic and delivery, as much as Puzzle Quest ever did, it has got its work cut out to match the former game's impressive performance at retail. Early indications are that it isn't seeing quite the same take up as Puzzle Quest which could well be down to the art style and slightly complex play mechanic.

Testament to this is the fact that it is really hard to succinctly explain how the game works without actually playing it. Here, many reviews have got dragged into the intricacies of how the two elements meld together to form a cohesive whole, or how the game uses both top and bottom screens of the DS to bamboozle your rhythm action senses into submission. We could too, but much space has been spent on this elsewhere. What we can talk about is the aesthetic and story style which seems to have been often overlooked.

The game places itself in a Japanese downtown urban environment. The order of the day here are long lank fringes, baggy cloths and (heaven forbid) not a few hoodies. It's what I'm reliably informed the kids call emo, and it manages to pull the feel off with some style. Cut scenes and transitions are extremely slick and certainly make viable the RPG elements of the game. So believable are the environments and amiable the characterisation that it doesn't take long before you fall in love with both. It manages that hardest of tricks for a video game, making us care about what we are doing.

This is most likely to be a game for the older kids in the family, rather than those just starting out. I found the variety of play styles does however make it appealing to both boys and girls. In fact it wasn't long before most of my family had dipped in to some extent, and our breakfast conversations often turned to last night's successes and failures on the DS. Although it's not an open world like Animal Crossing: Wild World DS, its flexible combat system and play style does mean that there are more than a few ways to progress through the story. I frequently got into heated debates over the Cornflakes about how exactly to deal with particular level bosses or certain characters.

All that said, this is a game that doesn't pander to the casual gamer. Those that persevere will however find a very accessible experience bubbling under the teen angst. The hardcore will lap up the various manga references and sometimes spiky difficultly levels. Success for the game at retail rests however on whether Square Enix is able to communicate their product to a wider casual market. They haven't made it easy for themselves (in the way that Puzzle Quest's pick up and play mechanic did) but with the wind blowing in the right direction it has a good chance of becoming a breakthrough hit.

You can support Andy by buying The World Ends with You