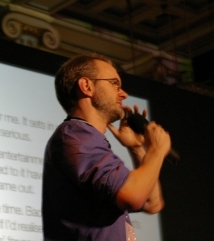 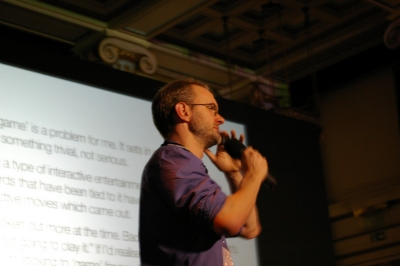 As GameCity gently reconnects players, creators and critics with each other they remind us that games are a very individual and human activity.

We all get inspiration from different places for what we do. But as a people person, video games often grind down my enthusiasm for writing about them. They have simply got so impersonal. Release after release is churned out by the institutions of this newly crowned global industry and the clamouring throng of avid game players moves tribally from one to the next with rarely pause for thought.

To try and create some calm admits the excitement, I've been writing about games more personally. GamePeople soon attracted many more creative people, and happily evolved into something I like to read, as well as contributing to.

Trying to pin down why I liked this person-centred approach to videogame engagement was as hard as trying to explain the site to someone who hadn't visited before. It soon starts sounding touchy feeling - worse still, earnest and worthy.

Last year though, I got talking to Iain Simons after hearing him on a Gamasutra Podcast and found a great dialogue partner in the form of GameCity - the Nottingham based game culture festival.

We got involved in last year's festival, bringing some left-field contributions in the form of a Theology of Gaming talk and Rebecca's video game song reviews. But mostly we just got really inspired at their very different approach to videogame engagement.

As I wrote back then, I was most intrigued by the public performance of Flower. Sharing the game, in the cathedral-like city building, as dusk fell and late shoppers dropped in felt almost spiritual. Game Church was the phrase I coined for it, but it wasn't until going back to GameCity this year that I got my head round why that experience felt so interesting and unusual.

Never before have so many people written so many words, and said so little.

Catching some of Simons' keynote speak made something click for me. "The point of the festival is to illustrate that games are made by people" he said at one point. I realised this same instinct - to look for the human-ness of videogames - is behind GamePeople.

"As the games industry has globalised", Simons continued, "it has failed to develop a human face". Listening to this, I realised that this affects how we consume games as well as the way we create them. Alongside the de-humanisation of game development there is the same lack of engagement in the way we critique and discuss videogames.

Never before have so many people written so many words, and said so little. Ironically, at a time when thousands write, blog and tweet about video games the majority of these responses are essentially the same form - and often repeatedly saying the same thing. It's a slippery slope when everything is written with half an eye on Metacritic.

The success of GameCity shows that there is a hunger for a fresh, more personal, relationship to videogames. "The point of the festival is to illustrate that games are made by people" said Simons. Rather than industrial machines that create perfectly standardised experiences, the best games are as haphazard, biased, individual, chaotic and creative as the individuals that make them.

Rather than industrial machines that create perfectly standardised experiences, the best games are as haphazard, biased, individual, chaotic and creative.

Games like Flower and Limbo are great examples, and have been prominent at the last two festivals - in the talks, the branding and the general gaming buzz. And, quite incidentally these are games that I've gone to the festival to talk about - simply because GamePeople's reviewers have wanted to respond to them more than any others.

Simons' faith in game's significance is infectious. "Games are complex and valuable and important." Leaving the festival, I go home with a hunger to discover and invent more creative ways GamePeople can playfully discuss, engage and enjoy this cultural phenomenon.

It's hard to do this though, when the majority of the current interest, and traffic, focuses on day one reviews and top 5 lists. But nonetheless I'm sure that slower, longer and more sustained responses to games will gain more and more interest as time goes by. It seems like this broader response to gaming is a much better way to ensure there is a genuine ongoing discussion in the public sphere - beyond early adopters, hobbyists or fans.

Simons makes a similar point in his keynote, "Treating the next thing as the best thing and what has passed as obsolete cannibalises value in the industry." Unless we slow down and start treating these creations as serious long-term valuable propositions, gaming will always remain on the periphery of the most important conversations in our culture - the ones where values and meaning are hammered out.

It was a perfect moment of improvised public theatre.

Sat on the steps after the keynote, I was still trying to think all this through when a man in a blue tabard walked past talking avidly on his phone, clasping a map. Then another man with a large Pacman attached to his chest sprinted past the end of the street.

As he hit top speed, the man I now realised was the Ghost spotted him, pointed, shouted and gave chase, all the while sending instructions to his colleagues on his mobile phone. They both disappeared up the street, pursued by a puffing photographer.

It was a perfect moment of improvised public theatre. I instantly wanted to find out how the game was run, and how I could get this going back in Exeter - a similar response to the Flower Church experience from last year.

It's moments like this that are the crux of my enthusiasm for GameCity (and my GamePeople reviewers). The simple joy of seeing what happens when you treat games like significant human experiences. They become more playful, more engaging and more enjoyable - because we are able to own them. They are meaningful enough for us to want to respond in personal, creative and playful ways.

It's moments like this that are the crux of my enthusiasm for GameCity.

Whether it's a public play-through in a sacred space that transforms a game into a spiritual experience, a review that turns out to be a Song or Radio-play, or competitive street theatre that draws bemused looks, these responses great fun. But not only that, they can be experienced and related to by almost any audience and create conversations about these games beyond the usual shores of the hardcore gamer.

It all sounds a bit evangelical I know, but I'm happy to be a little earnest if it means we can go on finding new ways to respond to games and widen the debate in the streets and town halls of cities like Nottingham.

You can support Andy by buying GameCity 5 Faces its Demons