The Death of Hardcore Gaming

The Death of Hardcore Gaming Article 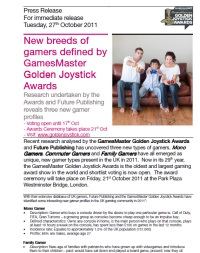 Family Gamers validated by new study. More significant is the video-game industries realisation that they need to do more than mass market to the core gamers. Narrowcasting is the order of the day. What's your gaming tribe?

Surveys and studies can be tailored to prove pretty much anything. However, sometimes a well researched piece of work undeniably underlines reality. A new study sourced with demographic profiling from TGI a leading provider of media surveys, does just this as it sticks a pin in the shifting ground of videogame players.

Commissioned by the Golden Joystick Awards and Future Publishing, but remaining strangely unpublished beyond a headline heavy press release, the research reveals three new gamer profiles. As they put it in the opening paragraphs of the study "Recent research has uncovered three new types of gamers. Mono Gamers, Commuter Gamers and Family Gamers have all emerged as unique, new gamer types present in the UK in 2011." I like how they are thinking.

Perhaps the best take-away here is that we can longer understand ourselves as gamers or non-gamers. The world is now fractured and segmented and requires a more tribal understanding. Whether it happens quickly or slowly, it is inevitable that videogames will follow digital TV and Radio in their increasingly Narrowcast (rather than Broadcast) approach.

As George Walter, Editorial Coordinator of the GamesMaster Golden Joystick Awards, puts it "As the gaming landscape rapidly changes we're seeing the creation of new gamer profiles resulting not only from technological advances like mobile devices and motion control systems, but also because videogames are now intrinsically integrated into everyday life. It's no longer a case of 'Gamers' and the rest of us' it's more 'what kind of gamer are you?'"

The TGI backed study goes on to profile each of its new gamer tribes:

Now they sit round the TV and play games.

Family Gamer: New-age of families with patriarchs who have grown up with videogames and introduce them to their children - past: would have sat down and played a board game, present: now they sit round the TV and play games.
- Defined characteristics: Parent of children aged 5-15, owns a console, spends at least five hours a week playing console games, and agrees to the statement "enjoy spending time with their family".
- Incidence rate: Equates to approximately 2% of the UK population (1,045,000)
- Profile: 57% are males, average age 38.

Is the main person who plays on that console.

Mono Gamer: Gamer who buys a console driven by the desire to play one particular game i.e.. Call of Duty, FIFA, Gran Turismo - a growing group as consoles become cheap enough to be an impulse buy.
- Defined characteristics: Owns any console in home, is the main person who plays on that console, plays at least 10 hours a week on the console, has spent less than Ł100 on games in the last 12 months.
- Incidence rate: Equates to approximately 1.5% of the UK population (737,000)
- Profile: 88% are males, average age 27

Plays all their games on the move.

Commuter Gamer: Plays all their games on the move - e.g. iPhone/iPad
- Defined characteristics: Owns a tablet PC or a mobile phone that they regularly play games on. Is in full time employment.
- Incidence rate: Equates to approximately 11% of the UK population (5,585,000)
- Profile: 70% are males, average age 36. 18% live in greater London.

Of course these groupings are as generic as a Myers-Briggs indicators - and are just that, indicators rather than pigeonholes. But as a starting point they are actually very useful. It was this same instinct that, some five years ago, started me writing about games from a family gamer perspective.

Of course, it's nice to see Family Gamers talked about in an official study, but more than that the acceptance that we need to address game players as if they are people (which I hear some might actually be) is a big step forward.

I've really enjoyed developing some 40 different Narrowcast reviews, alongside my own Family Gamer niche, on Game People the last few years. There has been a steadily growing interest and response from readers in these different tribes, and it has led us to create some very unusual ways of talking about videogames - Songs, Stand up, Radio plays and Origami Haikus to name a few.

What has kept us going has been the direct and immediate response from these different gaming tribes. Most recently the move into video with Family Gamer TV for the Family tribe has seen a leap in engagement.

As games do this, they grow up.

It's this perspective of gaming that also leads to much more interesting games. As I was talking about on last week's FGTV show, games like Limbo and Flower are much better places for Family Gamers to start than the mass marketed family games because they actually treat the player as if they have the concerns of a real person.

As we engage with gamers and games in a more person-centric fashion I have great hope that videogames will emerge the richer for it. This personal engagement offers the resources they have been lacking to ask interesting questions of developers and designers. What would this game look like if it wasn't violent? What does the player take with them once they've stopped playing? How does this entertainment play with the cultural ideas in the mind of the player?

As games do this, they grow up. They still struggle to throw off the old habits of servicing just hardcore gamers with violent experiences -- and more to the point violent experiences that treated death and loss with an unthinking juvenile perspective.

You can support Andy by buying The Death of Hardcore Gaming