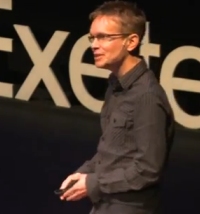 Full transcript from TEDx talk "Sustainable Perpectives on Videogames" that was given at TEDxExeter 20th April 2012.

Hello there, that was quite an introduction!

As well as all those things I also produce some rather unusual responses and perspectives towards videogames. So, sometimes that is from a family perspective - looking at how families engage with games - but perhaps more interestingly, in this context, I get local artists, local singer-songwriters, local play-wrights to respond to games but in a rather unusual way. Let me show you what I mean:

You are the Halo
You're the divine flow

How many hours have you sat around believing
a story of yourself that simply isn't true?
You're so huge nothing can contain you

Rebecca Mayes, there, singing about Halo 4 and I will be coming back to explain a bit more about why she is doing that in a little moment.

To be human is to be a storyteller. In 1947 when Goldsmith and Mann filed their U.S. Patent for their Cathode-Ray Amusement Device they unknowingly created a new way to tell stories - a new way to be human.

But you might be forgiven today for thinking that their gift to us of videogames is about entertainment, excitement, adrenaline with a perhaps slight tinge of violence thrown in for good measure. I want to suggest that videogames are much broader than this. That, rather than just entertainment, they want to address our hearts.

Videogames offer a rich pool of stories. We invest millions on technology and on delivering these experiences. And in them can be found cutting-edge, ground-breaking ways of making sense of being human. Here are some examples:

But aren't games just for fun? Well they are for fun and they are for enjoying but when I sit down to play a game at my videogame console a part of me feels more complete and more whole. In a similar way to reading a book or watching a film, games address my emotion and address my heart.

To be a player is to be a creator. The nature of games means that we get involved with the stories they are playing, so unlike books and films and for me, faith, videogames provide a natural foot-hold into them so I can become the owner of the stories I am experiencing rather than an outsider.

I get to enjoy this quote here from Roger Ebert who is describing what it is to write or to paint:

A state of reverie takes over. There is no sensation of the passing hours; the voice inside our heads falls silent and there is only colour and form and texture and the way things flow together.

If you've played a game perhaps you've experienced that.

And, because players get to be creators/co-creators in videogames, they get privileged access - we get privileged access - to these hundreds of ground-breaking stories that potentially can be fresh ways to make sense of what it is to live on the planet. So whereas films kept us in touch with naiveté and hope and were an antidote to cynicism, videogames keep us in touch with engagement and ownership are an antidote to exclusion and silence.

But, ironically, the way we talk about games has become reduced and narrow. We think that games are just to be enjoyed by a small portion of society. Our discussion of entertainment, our marking them out of 10, of talking of play mechanics and of graphics and sound has simply become monotone and doesn't sustain adult interest. This means that videogames don't have the chance to sustain us.

Their potential - that pool of ethical, social, psychological and perhaps spiritual - contribution to human life is lost and is missing from our day-to-day. So while it would be odd to say who is a reader or who is a watcher of films here, we would still quite happily say who is a gamer and who is a non-gamer.

It's time to start talking and thinking differently about videogames. I'm calling for a new priesthood of critics who know what it is to be in the flow and enjoy playing a game, who have access to that pool of meaning. But want to connect it to what it is to be human.

But where to start? Where do I find my priesthood?

Well, publishers want to own the stories around their games. Quite naturally they measure success in terms of unit sales, perhaps a high average review score on things like Metacritic. Online, there's an avid group of websites vehemently discussing and being excited about games. But, there too, it's about entertainment, it's about graphics and sound there's very little talk of what games might mean in a broader sense.

At retail, too, the way we label games does as much to encrypt as it does to engage. We spend a lot of time and energy keeping the wrong games out of the hands of the wrong people and very little time getting the right games into the hands of the right people; people who will enjoy them, people who would get something out of that pool of meaning, whose lives would be enriched by them.

Perhaps stores like Game and Gamestation struggle because rather than being places where we go to overhear ground-breaking ways of making sense of life, they are the place we go to buy a new Xbox or Playstation.

It's in this context that we can start to get honest about games. We can admit that many of them tend toward violence and decide how to talk about that. We can also say that for some people they are quite addictive experiences and perhaps we can even say that they are just getting started, that many of them are simply juvenile but that there are green shoots that we want to celebrate.

A community, a family, can decide which games they play, perhaps choosing games which are non-violent or perhaps, in a similar way that faith communities have made sense of dark and violent stories in their faith texts, can say that the existence of a dark game owned appropriately isn't necessarily the sign of a social illness and potentially the sign of social health.

How does that work? Well perhaps in the way that we used to teach our children of the horrific tales of Noah's Flood and the conquest of Canaan in Sunday School, the presence of dark games helps us avoid inoculating ourselves or our children against darkness, loss and danger and helps us engage with those difficult subjects.

It's this space that inspired me to try and get the conversation started. How is it going to do that? Working with these local artists, singer-songwriters and play-wrights I created some theatre which is designed to open up that conversation. Let me show you a bit more of that now.

Bob: Well you kind of need two portals don't you. You can't have one portal otherwise you'd go through it and end up exactly where you started! They should have called it 2 Portals, really.

Fred: Yes, but the first game was just called Portal.

Bob: I bet it was short.

Lara was clearly about to make a tart response when suddenly, several heavily armed men appeared from the tree-line and began killing everybody. Neil dived for cover while Lara stood illuminated by gunfire and ancient clay pottery rained down from the sky.

This resulted in a furious display of scribbling from Neil. "This is exactly the sort of behaviour we have received complaints about, you can't just go around destroying items of historical significance!"

You know, hearing Rebecca sing about Halo like that, laughing with Adam and Nick as they talk about Portal 2 and journeying with Chris about Tomb Raider completely changes the conversation around those games and then creates space for us to engage with them. It's my contribution to a more sustainable perspective towards videogames. It lets games sustain us and stewarding this precious resource not only puts us in contact and opens up these ground-breaking stories but broadens our understanding of what it means to be human.