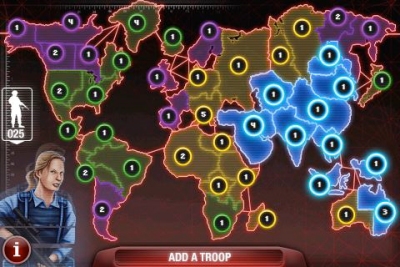 iPhone Risk puts the classic in your pocket. Restraint and quality win out over innovation and novelty to create a strong version of the classic game with family friendly portability.

I've always found Risk to be a complicated game, when playing on a board, that is. How many countries do I have? Right, so how many reinforcements does that mean I get? What do I do with these Risk cards again?

Admittedly I would get better the more I played, but I just don't play the board game enough to cement the rules in my mind. It's not helped by the fact that I don't particularly enjoy reading the rules in the first place either, and instead usually rely on being taught by someone who already knows the game.

I remember playing Risk on my Commodore 64 and being so glad that it was going to handle the rules for me. All I had to do is decide where to put the reinforcements I was given, where to attack and, well, I was still a bit confused about when to use those cards.

Risk on the iPhone is, basically, the same as every other version. After all, the point is to play Risk, not to totally reinvent it. There's a nice silhouetted introduction which reminds me of the box art I've seen on some editions of Risk. I love games to look good, and the intro is a nice start.

All you can hear is the sound of battle and, if you're as nosey as I am, you'll be desperate to take a peek and see the state of the map.

I started a single player game against two computer controlled opponents, letting the game set up the map for me. I just wanted a quick start, so couldn't be bothered with any of the setup. It was nice and simple to get going and I was soon being handed my first batch of fresh-faced recruits, ready and willing to die in the cause of founding my global empire. And die they would - I've never been good at recognising when to stop and usually end up with a load of countries all containing one army each.

I don't know how best to describe my playing style. Sadistic, probably describes it most accurately. If, by some miracle, those thinly spread troops survive and it looks like I'm going to win, I like to back off and get another few rounds of reinforcements in. I guess I just like to win with a decisive advantage, as if simply winning wasn't enough.

While we're thinking of massive armies, that does highlight one of the major differences between Risk on the iPhone and the board game. It's possible to load your territories with huge numbers of troops - I've had over a hundred in one country while building that massive advantage - which is a bit more difficult with the board game. I'm not even sure if there are enough pieces to represent that many troops.

Most of my experience in playing Risk on computers is with single player modes, but Risk for iPhone has a multiplayer too. This offers a couple of options - Pass Play or Wireless Play. Wireless Play obviously requires another player with an iPhone/iPod Touch so it's Pass Play that's made up my multiplayer experience here. It does exactly what it says on the tin: take your turn, then pass the iPhone to the next player so they can take theirs.

It's a great, and inexpensive, opportunity to play one of the classics of strategy gaming.

Pass Play can get a little bit frustrating when your human opponent is taking a long time on their moves. All you can hear is the sound of battle and, if you're as nosey as I am, you'll be desperate to take a peek and see the state of the map. I should also add that it's a bit frustrating when your opponent conveniently 'forgets' that their turn has ended and plays part of yours.

Risk for the iPhone/iPod Touch is a faithful recreation of the game. It plays well, handles the rules for you and, perhaps most importantly, lets you play on the move. It's a great, and inexpensive, opportunity to play one of the classics of strategy gaming. If you want to try out your strategic thinking, Risk is well worth a go.


You can support Andy by buying Risk