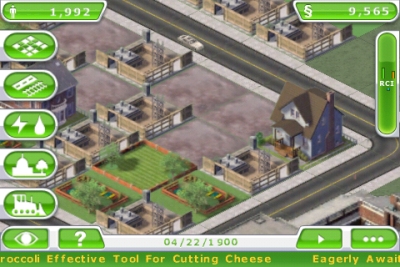 Sim City Deluxe enhances the iPhone and iPod Touch city building. Smoother faster play than the original and at a price that makes it irresistible.

Sim City holds a special place in my heart because it was my first PC game. Those heady days of building a huge city, so much more involved than anything I'd played before. I even ended up printing my city out on our dot matrix (seriously) printer and putting it together as a big poster on my wall.

Looking back now, the original version of Sim City seems so basic and lacking, but the underlying principle was rock solid - a fun simulation of a city with you as the mayor.

After several updates, innovations and a platform shift, we arrive at Sim City Deluxe on the iPhone and iPod Touch. I bought Sim City International for the iPhone and never really got into it. It was so long ago that I can't really remember what was up with it, but I can't find it on the app store now and assume others failed to bond with it too. I was hopeful that Sim City Deluxe would be an improvement on what had come before and, I have to say, I'm not disappointed.

The game setup is familiar territory - choose a city name (mine is always 'New Cardassia'), a name for the mayor, and a difficulty level which, as far as I can tell, only affects how much cash you have at the start of the game. I'm terrible at budgeting, both in real life and in Sim City, so I invariably choose the easiest level and the highest amount of money.

Once you're into the game it looks very like Sim City 4. You can see how the styling has been influenced by games like The Sims which hangs together really nicely in my mind. I can almost imagine The Sims inhabiting Sim City. Now that I think of it, that was actually an option in Sim City 4, but not in Sim City Deluxe. It's not a huge omission or anything, but being able to plonk your Sim into the city you built for them was a cool idea.

I love exploring a bustling metropolis from above but sometimes forget the city has to work as well as look good.

Playing Sim City Deluxe has brought out the same old flaws in my playing style. I've already mentioned that I really struggle to budget, and that's partly because when the demand indicators tell me there's requirement for more residential, commercial or industrial space, I have an uncontrollable urge to go ahead and build it. Sim City is more of a 'slowly slowly' game but I end up rushing in and spending more than I should have.

Then there's the visual element. I loved my home-printed poster when I was younger, and I want my city to look good today. I love exploring a bustling metropolis from above but sometimes forget the city has to work as well as look good. There's little point in separating all the industrial zones from the residential areas if there's not a good road system in between.

That's the element of Sim City that's both so engaging and so difficult to master. It really is a complex simulation and, while it's loads of fun, it's got lots for you to think about. I've been fairly happy with the Sim family over the years. Well, Sim Earth and Sim Ant were pants, but let's not dwell on those.

The iPhone's touch interface works well with Sim City Deluxe. Zooming in and out is the standard 'pinching' affair, and moving round the city is just a case of swiping with your finger. Roads, railways, pipes and so on are laid by dragging a finger across the screen, although I always found that I had to adjust where they were going to be placed. I guess that's just fat fingers on my part (ed: surely not).

Of course, the real attraction is that you can take your city with you wherever you go.

Of course, the real attraction is that you can take your city with you wherever you go - so you can be battling with fires while you're on the bus, or opening a new city zoo during lunch.

Sim City Deluxe is, on the whole, a very capable addition to the Sim franchise. It plays much like the desktop version of Sim City 4, and is easily picked up by players with previous experience of a Sim City game while a tutorial helps Sim newcomers.

If you've already been hooked by Sim City you'll definitely want to give this version a go. If you're new to the whole area of city management, well with a free version to give you a taster what have you got to lose? Try it out and see what you've been missing.


You can support Andy by buying Sim City Deluxe