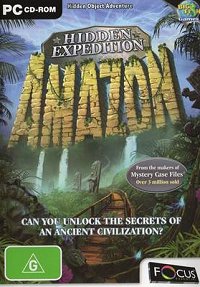 Hidden Expedition is strangely moreish although it really shouldn't be. My inate human desire to find those hidden items overcame the unimaginative delivery to unearth a surprising amount of entertainment.

From the makers of 'Mystery Case Files' comes another 'hidden object' game in the form of Hidden Adventures: Amazon. I've only played one or two of these types of games before - most recently CSI: New York. I didn't much enjoy that one and I must admit I didn't expect much from this one either. But it wasn't long before I started to 'get it'.

In Hidden Adventures: Amazon your task is to explore the depths of the Amazon rainforest in search of a missing professor. Well - explore is a slightly exaggerated term, as it just means that you'll be presented with more or less static images of various locations here and also in some other places like an office in New York, markets in Casablanca and so on.

At each location you get the usual 'hidden object' scenario. The liberally scattered with objects such as chickens, wrenches, scissors and numerous other things. Your task is to find the 12 specific items that are indicated at the bottom of your screen, along with various beetles which can give you an extra hint, and the occasional journal page which builds up to tell the story of the professor's journey in to the Amazon.

Clicking on an item in your list shows you a silhouette so you have a better idea what it will look like on the screen. This is really handy because not only do you now know the shape, but you also know how it is oriented on the screen which can give you some clues as to where it might be hidden. If you get completely stuck - and it will happen - then click the item & then on the hint beetle to get its location.

The items are sometimes really easy to see and at other times are very cleverly worked into the image.

I had to do this several times and was amazed at how obvious it was to see after getting the hint, but completely impossible for me to see beforehand! The items are sometimes really easy to see and at other times are very cleverly worked into the image so that a casual glance over an area will not reveal it, with the eye being tricked into not seeing it for what it is.

Initially I tried to search for each object in turn but quickly changed to clicking on every clearly identifiable item on the screen which would pretty rapidly leave me with just a handful of tricky ones left to find. If you click on too many wrong things too quickly then the game punishes you by hiding your cursor for a few seconds but generally you don't have to resort to random clicking anyway.

You also get the occasional inventory item which you will sometimes use in the same image & sometimes carry over to the next location: this might be some scissors which you can use to cut some stitching to reveal another item, or some oars which you will later use on a boat.

I found myself strangely addicted to the game kept on coming back to solve another couple of scenes.

Although I warmed to the relaxing rhythm of hunting the objects of the main game, I was less impressed with the mini-game puzzle elements that crop up occasionally. They were just a bit hit and miss - some very neat with just the right level of complexity and the pleasant feeling of 'ah - I get it!', whereas others I found just incredibly confusing. Fortunately the hint system is unlimited during these sections and you can use it to 'solve' sections if need be.

I found myself strangely addicted to the game kept on coming back to solve another couple of scenes (and there are a lot!) until finally reaching the end of the line, rescuing the professor and saving the endangered beetles. It's a peculiar game, with a bit of a monkey fetish, but for the price I would certainly recommend it to both fans of the genre and those who fancy trying something a little different.

You can support Andy by buying Hidden Expedition Amazon