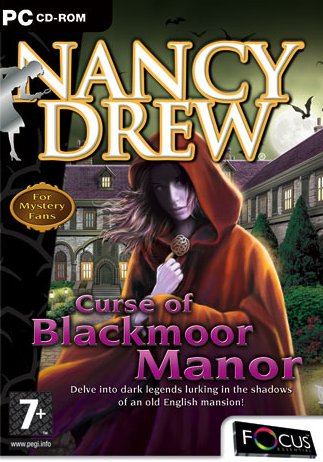 Curse of Blackmoor Manor is spooky point and click, with glowing red eyes in the dark, mysterious noises, and dark hidden passages, and it may be a little scary for younger adventurers.As the eleventh of twenty one Nancy Drew adventures from Her Interactive, we know the drill - hunt the screen for items, talk to everyone and apply some cryptic-crossword thinking to solve the puzzles.

There are two difficulty levels available for this game - Senior detective or Junior detective. The Junior settings provides extra help in the form of tasks which are automatically entered in Nancy's notebook, and these can be ticked off as you perform them - although they don't seem to get removed from your task list after doing this which seems a little odd. This is great for the younger players as they wont be left wondering what to do next, but will still have to investigate rooms for themselves so that the next tasks get triggered.

For the Senior detectives in your family, this task list is dispensed with and it's down to you to work out. I must admit I got a little stuck at the beginning as I had visited every available room, talked to everyone and even solved a puzzle, but then I just couldn't work out what to do next. It turned out that I had to talk to another character who only became free at a certain time of day (which I had been told but had probably not taken notice of) - and to get time to pass you have to set your bedside alarm and have a nap! Once I'd realised this I was able to make some more steady progression.

Maybe it's just me but I'm afraid I found the vocal work highly irritating - Nancy in particular has a really whiny voice and the 'English' accents are laughable - from the over-the-top poshness of the stodgy Aunt character, to the bizarre cockney pub owner who talks in ridiculous rhyming slang. And not just the odd phrase, but more or less everything is a rhyme.

Not just the odd phrase, but more or less everything is a rhyme.

Movement around the manor was also annoying too, you have to move your oversized cursor around the screen - if it turns into an arrow, a click will move you in that direction, moving to the edge of the screen will sometimes rotate your point of view, and if it turns into a glowing magnifying glass you can examine an item. The cursor keys can also be used to rotate left and right, but I couldn't understand why I couldn't use the other cursor keys to move forward and backwards?

The actual puzzles are mixed. Some are very straightforward, whereas others certainly require a bit of observation and grasping of connections between the items scattered around the manor. And there are an awful lot of items to look at, indeed it seemed to me that there were too many - maybe later in the game more of them become relevant, but it's a bit of a case of information overload at the start as you try to decide which things are relevant and which are not. Solving some of the puzzles also requires you to play little board games with the young child, Lucy. I didn't find this overly onerous, but it seemed that to get any information at all out of her you had to play another one. And one game I really did find so tedious it nearly drove me mad - I just couldn't beat her at it and it just seemed to be a totally random outcome.

Maybe this just wasn't my style but there were too many annoying things for me to enjoy it.

As you can probably tell I wasn't really that enamoured with this Nancy Drew adventure. I do like adventure games, having played them since I bought my first computer (a ZX Spectrum) and taking in games like The Hobbit, multiple Infocom classics and more recent point and click games like Monkey Island. Maybe this just wasn't my style but there were too many annoying things for me to enjoy it.

That said, Her Interactive must be doing something right as there are twenty one of these games available. The style and format allows them to generate them on somewhat of a production line basis which obviously saves costs - but I would have liked to see a slightly more modern looking game with a cleaner and slicker interface.