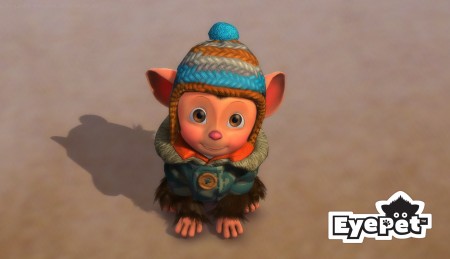 Eye Pet is the new PlayStation Eye game on the PS3. But where Eye Pet differs from other offerings using Sony's PS3 console and camera is in quality. When bought with the PlayStation Eye camera the game comes in some great pet-appropriate packaging. The sheer finesse and attractiveness of the package is endearing enough to involve everyone in the room - mums, dads, kids and grandparents.

Eye Pet works by sparking imagination. Much like the demonstrations of Natal - Microsoft's new motion camera technology on the 360 - Eye Pet manages to convince players that are interacting with a real creature in their living room.

This is no mean feat. We are all, kids included, used to an array of High Definition experiences and as savvy consumers it takes a lot to impress, never mind get us off the couch. Eye Pet manages to do this by putting our living rooms into the game with the camera, and then placing the pet-creature into that space. You look at the screen and see yourself and your room, but there in front of you is an amiable little pretty-gremlin.

The circled is squared by providing an artifact from the game to put physically into your room. This, essentially a brightly coloured beer mat, enables players to control a variety of tools from hairdryers to heaters to food. Along with this high fidelity control, players can also interact with their bodies - stroking, patting and playing with their new pet-playmate.

By having something physical to track, the PlayStation Eye camera does a much better job of working out what is going on. In the main the game does what you want it to do. This does require a really well lit blank space in which to play though. Expect to clear away magazines, toys and takeaway detritus from in front of the TV to maximise the game's accuracy.

It's a self perpetuating cycle that is very addictive.

This avoids being a chore because of what Eye Pet gives back - a genuinely sentient pet-friend. As with other games like this, you slowly get to birth, know and name your creation. From here you work your way through a series of tasks that open up new activities and games. It's a self perpetuating cycle that is very addictive. Favourite so far is the pet washing and animal bowling.

In my family Eye Pet really sparked something special. The days after first playing the game were filled with imaginary friends, made up pet games and general game related creative play. My kids (now two, four and six) enjoyed the game a lot and left it with a sense of having met a real pet. The fact that the little fell could be seen on the screen but not in the room seemed to make total sense for them - this is the logic of imaginary friends the world over - genius!

I'm aware that you need a relatively technical parent to set things up, and that some of the tasks rely on reading detailed instructions. But other than this most of the instructions are with full video introductions and controls are kept simple. As long as you bear in mind this is a game to play with the kids rather than to entertain them alone, your on the right track.

Eye Pet introduced a new little creature into our family.

Eye Pet on PS3 surprised me and my family. We've played quite a few of these more gimmicky experiences and not got on with them overly well. The PS2 Camera games never worked well enough to enjoy, and many of the Wii's motion sensing experiences left us feeling somewhat unimpressed. But Eye Pet really delivered something new - a virtual experience that really worked.

The game's great visuals, endearing characterisation and sensible presentation were more than enough to drag us all in. Without wanting to sound overly gushy, Eye Pet introduced a new little creature into our family - and he seems to fit in well.

You can support Andy by buying EyePet