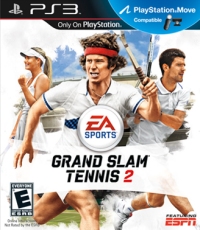 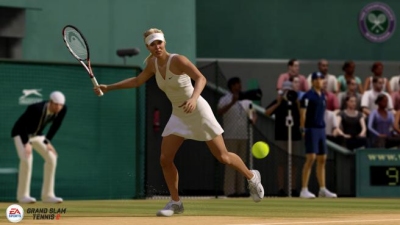 Grand Slam Tennis 2 brings tennis to PlayStation Move but ends up being jack of all controllers and master of none. Great fun for families but for grownups more promise of things to come than a fully fleshed out motion experience. I suspect Grand Slam Tennis on Wii U will be the de facto version.

I was a big fan of the original Grand Slam Tennis game. It was the first title to make use of the Motion Plus controls on the Wii, even released before Wii Sports Resort, and was the first time I experienced the sort of one-to-one controls promised (but not previously delivered) by Nintendo's motion controlled console.

Grand Slam Tennis was a revelation on the Wii. Not only could you control the direction and weight of your shot by the direction of your swing (more than timing as in Wii Sports Tennis and Table Tennis) but your on screen character perfectly matched your real-world motions in an uncanny way.

For Grand Slam Tennis 2, EA have decided to switch to the PlayStation 3 and 360 and not offer the sequel on the Wii. This approach is mirrored by their Tiger Woods golf series that will this year not be coming to the Wii.

While it makes sense to pause Tiger Woods on the Wii, having evolved the game to within an inch of its life, I was more disappointed not to get a follow-up to their new (and largely un-evolved) tennis game. I suspect that both Grand Slam Tennis and Tiger Woods absence on the Wii are to free up development time for Wii U versions when the new console launches later in the year.

On PS3 and 360 Grand Slam Tennis looks much more like the other tennis games available. However unlike Top Spin, Virtua or even Smash Court Tennis, which each have a distinctive control style, here we have the option of three different methods (two on the 360 which doesn't have a Kinect controller option).

First, on the PS3, are the motion controls I am familiar with from the Wii game. However, and I guess this reflects the fact that fewer players will use this aspect of the game, there simply isn't the same level of commitment here as in the original. Rather than the one-to-one motion of the first game, the PS3 Move version only mirrors an approximation of your real world motions.

It does an excellent job of detecting your motions and directing the ball left, right or central with a topspin, backspin or flat shot style. And as with the first game you can play with just the Move control and let the movement around the court be controlled by the computer, or pickup a DualShock/Six-Axis/Navigation controller to take charge of the running about.

This works well enough, but fails to take advantage of the Move's unique ability to detect how close you are to the screen. The one redeeming factor of Virtua Tennis 4's Move system was the ability to rush the net by moving closer to your TV, and it's a shame that Grand Slam seems oblivious to this aspect of Sony's controller.

Having enjoyed played tennis with motion controls I simply can't go back to button.

It also pales next to the fine three dimensional detection of Sports Champion's Table Tennis controls which managed to create the most accurate electronic racket system I have experienced -- even though this was in some part sacrificed by its need to include an overly generous safe zone to make the game playable by a wider audience.

Even though Grand Slam Tennis 2 does support up to four players, the general feel of the Move controlled gameplay is that this has had less investment than either the Skate style flick controls (where the left stick covers movement and the right stick can dial in different swings) or more traditional button controls (where timing is the main factor).

Both the dual stick and button controls are where Grand Slam Tennis seems to expect players to spend most of their time. Switching to these from the Move option suddenly makes sense of the visuals as your dialled in actions are matched on court by all manner of acrobatics.

There is a happy rhythm that develops while playing with sticks that felt a lot like real tennis. Some will bemoan the absolute control you have to sacrifice for the sake of realism, but in terms of sheer enjoyment (rather than winning) the sticks really to bring a viable new system to the table.

More serious video-tennis players, which I am assured do exist, are more likely to opt for the precision of the button controls. This does away with the looseness of both Move and stick shots, although at the same time does make the game feel much more mechanical.

For me, having enjoyed played tennis with motion controls I simply can't go back to buttons, and in fact even the novel twin stick approach feels rather staid. Like with my first go on Tiger Woods 07 Wii, I simply don't want to play tennis without a motion element any more.

Again like that first Tiger Woods outing, both the original Grand Slam Tennis and this sequel have a lot of work to do on their motion controls before they are perfect. As the new game stands it certainly proves this is viable way to play tennis with the Move controller.

For all its visuals, sound and big name branding, Grand Slam Tennis 2 hedges its bets too much.

Having spent a considerable amount of time with Grand Slam Tennis 2 I now find myself going back to the old Wii game because of the direct connection it creates with the player and the more subtle controls. For all its visuals, sound and big name branding, Grand Slam Tennis 2 hedges its bets too much. It turns out to be a jack of all trades but master of none. Although the original was underdeveloped in a few areas at least it committed to one control scheme that everyone had to use.

For families that don't have a Wii, Grand Slam Tennis 2 PS3 Move offers a great way to get kids into Tennis. Players of all abilities will be able to enjoy the game and can play together with a variety of control methods.

If you do have a Wii though the original Grand Slam Tennis still offers more convincing motion contols and at a fraction of the price -- although I suspect the release of the sequel will see a resurgence of the Wii game and a related bump in second hand price.

You can support Andy by buying Grand Slam Tennis 2