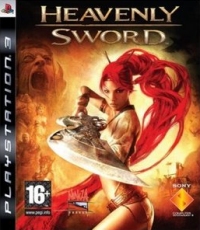 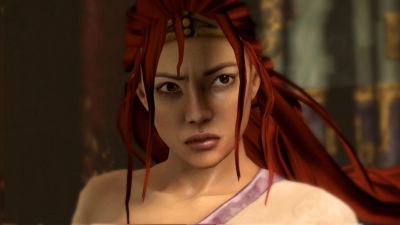 Heavenly Sword was one of the first poster children for the PS3 era. I can still remember seeing, what must have been CGI representations of, gameplay a couple of years ago and being blown away by the thought of controlling such fluid action. After the success of God of War on the PS2 Sony are obviously keen to foster similar franchises on their new hardware.

It still remains to be seen whether this approach has served them well. The gaming landscape could have been quite different if, instead of holding on for Heavenly Sword, they had released a beefed up God of War II on the PS3. God of War will no doubt come to the PS3, but the delay in the arrival of this truly triple A title may have cost Sony a considerable number of sales this yuletide.

We are in danger of putting the cart before the horse here; but in a nutshell the wider consensus is that Heavenly Sword struggles to achieve the scale and grandeur that was so captivating in God of War. This was certainly reinforced by our pre-game research that found many write ups played Ninja Theory's game as second fiddle to SCE Studios Santa Monica's PS2 swansong. It is certainly testament to the stature of God of War II that a game from the previous generation could hamper a release on a new machine. So, after an obligatory visit back to God of War II, it was with reasonably low expectations that we popped in the disc and sat back to experience it for ourselves.

We are a little smitten with the game. Not some boyish infatuation with the luscious Nariko, although this would be more than justified. Rather, we found ourselves willing to be wooed by the overall story of the game, happily drawn into a genuine conversation about this cursed young girl and her part in the saga.

The main game offers a solid six hours of playtime, without taking into account the desire to return for repeat run throughs. This is obviously on the short side for a full price next generation game that will most likely set you back a good GBP 50, but what it lacks in duration it certainly makes up for in quality. Although it has been said before, one of Heavenly Sword's key strengths is its emotive and well told story. Similarly to God of War, we begin with the apparent demise of the hero (or in this case heroine) and then slowly discover the full story through a series of flash backs. As things unfold we discover that Nariko is a young woman who has lived her short life under a curse. She was unfortunately born on the very day that a saviour had been prophesised to arrive. When no obvious saviourly arrival materialised the masses assumed the gods had cursed them and Nariko became the obvious scape goat. Haunted by dreams of betrayal and hatred by those around her, she somehow survived to take part in the war of King Bohan.

The bulk of the game proper involves making use of Nariko's nuanced combat system. Although at first this seems to involve mashing buttons, as the play (and instructions) unfold you soon realise that a high degree of strategy is involved. The mainstay of all this is the parry system; when not attacking Nariko can block attacks and enable you to perform a powerful counter attack. Once you have your hands on 'the Sword' this is combined with her different stances to enable you to block different styles of attack more effectively. This stance mechanic makes up the remainder of the combat; you can switch between speed, range or power attacks by simply holding the appropriate shoulder button. Once you have selected a stance this is then applied to any attack combo's you hit. Whilst this may sound a little complex, in practice the fights have a flow and rhythm to them that lets you largely forget about the controls and instinctively move with the action. When you are really in the groove Heavenly Sword almost feels like a rhythm action game than a slash 'em up. This is all punctuated by the use of special moves, which are triggered by the circle button and slow the action whilst the camera zooms closer, providing a welcome pause to the action, before drawing back again for the next stanza of moves.

Whilst this is all pretty common fare, Heavenly Sword has another trick up its sleeve: their six-axis projectile system. Nariko can pick up a variety of objects in the environment and then throw them with the X button. If you hold, rather than tap, the button you get a missile-eyes-view and can use the Sixaxis tilting to adjust its trajectory. At first this seems to be a bit of a gimmick, but as the levels open out you find more and more uses for it and it turns into another nuanced, well delivered aspect of the game. Some levels use this control mechanic to great effect as you have to curve arrows around trees and rocks to hit your assailants. A high water mark for the system is the moment you realise it can be employed to direct a cannon-shot into herds of enemy soldiers, sending them all flying. Superb!

In addition to the straight forward combat, there is also a smattering of puzzles that will have you looking for the right trigger to get past a door, or right timing to get you past a particular enemy or baletic move. Although never too intrusive, these feel like they have been added to break up the enemy onslaught rather than for any truly gamely reasons. None the less, the game is the richer for them so we have no complaint here.

Maybe now is a good time for us to divulge a little secret about this game. We are a little smitten with it. Not some boyish infatuation with the luscious Nariko, although this would be more than justified. Rather, we found ourselves willing to be wooed by the overall story of the game, happily drawn into a genuine conversation about this cursed young girl and her part in the saga. Heavenly Sword achieves this where many other games have failed largely because of the presentation of its story. To say that it delivers a filmic experience would be to trot of a tired analogy that doesn't do justice to what Ninja Theory have achieved.

A real sense of conversation develops between the player and the story.

Through a combination of competent cringe free writing, genuine acting talent and a seamless use of the game engine to deliver cut-scenes, Heavenly Sword paint a compelling and involving story. A real sense of conversation develops between the player and the story. Work has intelligently been focused on these characters and conversations rather than impressive environments or set pieces. These protagonists enable the game to establish a real connection to the player as they invest in their understanding of what drives and motivates each of the main proponents. The palette of performers is also well balanced and varied; from the beauty and kindness of Nariko; compassionate and oafish Roach; the Any Serkis exuberance of the almost likeable evil King Bohan; and the innocent feline Kai.

Six short hours later, out we pop at the end of the game, slightly tired and out of breath. Although we still aren't sure whether this is an out and out classic, there is no doubt in our mind that Heavenly Sword is in no way overshadowed by God of War 2. In fact the general mood of other reviews is a little perplexing. We want to firmly embrace this game as a work of master story telling that is great fun to play through. Whilst we may have to admit that it is slightly on the short side, the quality of the experience more than compensates for its limited duration.

Heavenly Sword is a game that can genuinely claim to be a next generation experience. Most excitingly for us this is not some clever new combat mechanic or simply more polygons; rather, it is a whole higher level of story telling that doesn't simply insert pre-rendered films into the game, but integrates characters into the heart of each play component.

You can support Andy by buying Heavenly Sword