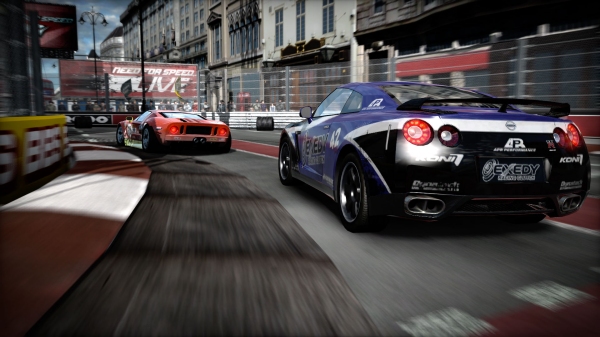 Need for Speed Shift changes the format of the series with a dedicated simulation game that gave me a more thrilling experience than any arcade racer has ever done before. Being accessible to even the most novice racer I found Shift delivering a stylish and visceral ride that everyone in the family enjoyed, whether they were playing or just watching me crash.

The Need for Speed series has never been one that's appealed to me in the past. The focus on American muscle cars with all the street-talking sub-culture always made me feel like I was playing an extension of the MTV show 'Pimp my Ride'. I also found the lack of focus on the previous games difficult to get my head round. Need for Speed Underground was a very arcade-like racer with a smattering of corny cut-scenes to push the nonsensical story along. The next year it tried to go serious with Pro Street. I never knew what to think when getting one of the these games.

This year the series has gone in a very different direction. The entire arcade part of the previous games has been put into the forthcoming NFS: Nitro game for the Wii & DS, whereas the more serious, simulation aspect has been turned into Shift. When I first heard about this I thought that the series had gone bonkers. One Need for Speed game in a year is bad enough, surely splitting the franchise like this would just create two games that felt tired and pointless?

This seemed a perfect blend of arcade and simulation as far as we were concerned - neither going too far in either direction to unbalance the experience.

But from the moment the title screen appeared on the TV I was completely hooked by Shift's professional and slick approach to being a proper racing game. I'll admit that I'm not a fan of the hardcore simulation racer. My real love comes from playing Mario Kart or Flatout with my family. The bigger the smashes and the more over-the-top carnage I can wreak, the better. I was skeptical that Shift could do anything to dislodge that type of game and the peerless Burnout Paradise as my entertainment racer of choice.

As well as the cool presentation that brought coo's from everyone who watched, another nice touch was being given a few laps of Brands Hatch to determine what skill level was most suitable. My son needed all the driving assists turned on whereas I went for the most realistic approach as I could handle. Both of us had an equally fun time as the feeling of speed, the connection to the track and car felt exactly the same for both of us. This seemed a perfect blend of arcade and simulation as far as we were concerned - neither going too far in either direction to unbalance the experience.

It's instant visual charm wasn't just confined to the way the cars looked or how they handled. The most amazing part of this game was the incredible feeling of speed that made us want to keep playing. Reaching speeds in excess of 150 kph really started to feel dangerously fast. The dials in the cockpit began to blur and trying to see outside of the limited cone of vision was virtually impossible.

The head-bob effect of going that fast felt so unique for a racing game and gave me a much more realistic feeling than any other game. What really shocked me was how the visuals reacted when I finally crashed. Instead of just bumping off a wall or coming to a quick halt over gravel, the screen would violently jolt around and blur into a complete mess before slowly returning to normal. This feeling of total disorientation made such an impact to these crashes. I felt pretty sick and dizzy myself and it made the thought of crashing the car on a fast corner all the more fearful in the future. No racing game, no matter how realistic or over-the-top it pertains to be has come close to giving me such a reaction.

Such was the level of immersion that I totally forgot I had an audience until I finished the race with a huge sigh and laughter erupted around me - this was such a thrilling and intense game.

Everyone else in the family thought this was hilarious. Especially when I would be ducking and weaving to avoid the other cars or trying to pull myself out of a slide. Such was the level of immersion that I totally forgot I had an audience until I finished the race with a huge sigh and laughter erupted around me - this was such a thrilling and intense game.

I'm sure this must be a game that some people will hate because it straddles the line of proper simulation and arcade style racing. But it provided the experience that I really wanted from Need for Speed - taking out the stupidity and cheesy cut-scenes and leaving just an excellent and satisfying racing experience. It won't be the game my son will want to play over Nitro when that gets released on the Wii, but I've found its opened my eyes to the world of authentic racing games. Because of that Need for Speed Shift delivers on what it could never achieve in the past few years - a sense of utter excitement and enthrallment.

You can support Andy by buying Need for Speed: Shift