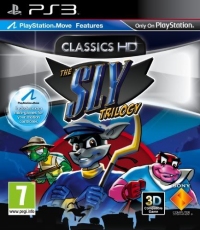 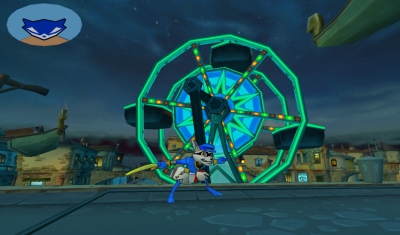 The Sly Trilogy PS3 offers three engaging platform games that combine fun characters with an engaging story. Together they create a coherent story that can be enjoyed by all the family - grownups as well as children.

I had never heard of the Sly Trilogy before I popped the disc in my PS3. I was immediately struck by some very crude looking graphics but a little research revealed that they are Playstation 2 games given the HD treatment and released for the PS3.

The graphics and characters reminded of me of the early Ratchet and Clank games with the cartoon like settings and corny dialog. The first game in the series came from the early days of the PS2 and this was evidenced by the tutorial levels telling me which buttons to press to perform moves as if the characters always described their day to day actions as involving circle and square buttons. It wasn't a great start, sitting there feeling patronised by a pixelated racoon and a turtle with a nasal problem.

Each game is divided into its own adventures (a theme that runs through all three) and is set as if it were an episode in a TV series. I was able to get going without any trouble and within minutes I had discovered a hidden surprise. I ran into what looked like a bush but turned out to be a thorny weapon of death as my character keeled over and a number popped up on screen. It turned out that the number represented the number of lives that I had left.

I experienced an instant increase in blood pressure as I realised that mistakes could be fatal.

I experienced an instant increase in blood pressure as I realised that mistakes could be fatal. Anyone who has read my Demo's Souls review will have seen the issues I have had in the past with games that have a definite Game Over possibility. The discovery of the fact that my character was not immortal suddenly added a sense of urgency and caution.

For the majority of the first game I controlled the central character Sly and received instructions or backup from the others. It feels like a solo adventure though and I missed being part of a team. Nevertheless, each level held the right amount of difficulty and I never felt that something had been made exponentially more difficult than what had gone before. Several levels took a few attempts, admittedly, but I was never tempted to assault the TV in frustration.

The second game sees the team trying to find the missing parts of the final boss of the first game and expands on the previous adventure by removing the one hit death element and introducing a health bar. It also fills the gap in the first game by providing more of a team ethic as missions are created for each of the three team members that require their particular skills to complete. The aim of each section becomes the final heist and jobs are performed to put the team in a position to attempt whatever is necessary to grab the swag.

This really opens up the interactions between the different characters and gave me a feeling of achievement when each stage is completed. As I got further in to the game, some jobs required the cooperation of team members thus enabling me to swap between team members and use their particular talents.

It made me care about the characters, their relationships and the goals they were striving for.

The third instalment is a slight departure in that it starts at the end and is then played in flashbacks. This time around the end goal is breaking into the Cooper family vault which is currently at risk from another of the world’s super criminals.

This job however requires a bigger, more cunning team and the emphasis of early levels is getting allies on board for the final push. This change doesn't detract from the camaraderie in the first two games but adds interesting new characters and skills. It pushes forward by exposing the weaknesses in the team. It does, however, feel less coherent with former enemies being brought back for this instalment and some of them feeling slightly recycled.

A nice touch is that Bentley (the turtle) is able to assist while being confined to a wheelchair following previous events. I cannot remember seeing any disabled characters in a game before and it is heart warming to see that he is not relegated back to his role of plan maker and takes a very active and vital role.

The Sly games grow and evolve rather than become repetitive and the new challenges and skills required with each new chapter create a fun ride around the globe. The characters are well rounded and the sense of caring for each other comes through strongly in their interactions, meaning that while Sly is the leader, all members feel as if they are equal partners.

Once I got going, the games appeared perfect for picking up, playing a couple of levels and then leaving again but I quickly found that all three games are un-putdown-able. I often found myself actually stopping 5 or 6 levels later, sometimes resulting in very little sleep due to sailing past midnight and having to get up for work the next morning.

It made me care about the characters, about the relationships between them and the goals they were striving for. It drew me in to the story as well as, if not better than, most PS3 games I have played.


You can support Andy by buying Sly Trilogy