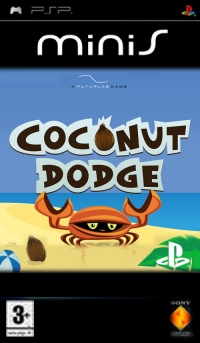 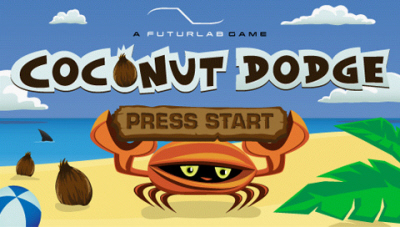 Coconut Dodge PSP keeps things vibrantly simple and creates a compulsive diversion for you and the kids. Don't ask why a crab would be collecting gems, instead just enjoy beating your previous score.

From the first play I couldn't shake the feeling that I'd played Coconut Dodge before, but I couldn't put my finger on it. The concept is simple enough that a dozen similar games could have been made, so my judgement would be based purely on whether it was any fun.

The concept is almost taken care of by the title, merely requiring deft movement left and right across the bottom of the screen whilst you collect jewels and avoid coconuts. Things get a little more complex when the coconuts start falling in formation and obviously the longer you survive the more frantic things become.

If you've got some friends round this could easily fill an afternoon as you pass the controller back and forth and attempt to beat each other's best efforts.

Your task is to score as many points as you can before coconuts knock the life out of you - it's a surprising amount of fun. The pacing means that you always survive long enough each turn to feel that this might be the time you smash that high score, even though inevitably you'll get close but fail.

You can play this PSP Mini game on the PS3 which makes it a very social game. Our family all took turns on the game one afternoon - and interestingly the younger members of the family faired the best. In fact, the simplicity of controls reminds of when we first got Gameboy Tetris in our student house and spent a term beating each other's scores.

Once you've had your fill of the main mode you can try the Maze game that challenges you to score a minimum number of points to move onto the next level. This is a much stiffer challenge and to be honest didn't float my boat, feeling far less whimsical than the main game. It might work better when played together as in this mode each game is very much shorter bringing you back to the game-pad with frantic repetition.

I probably won't be playing this game for weeks to come, but as a pocket money title that you can play both at home and on your PSP its great value.

You can support Andy by buying Minis: Coconut Dodge