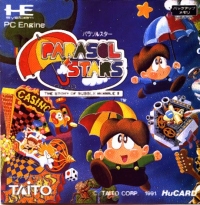 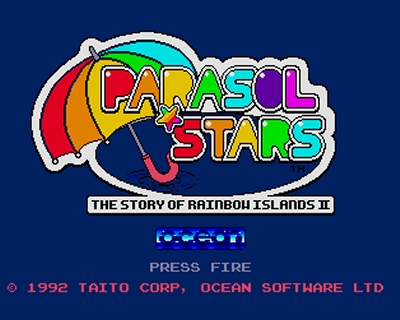 Parasol Stars magically extends the bubble and rainbow fun to some unassuming but surprisingly addictive umbrella action. Following the platforming of both Bubble Bobble and Rainbow Islands, Parasol Stars keeps thing bright, fun and simple. Scratch beneath the surface though and there is a labyrinth of controllable complexity.

Bubble Bobble was a classic platform game that made its name first in the coin Operated Arcades of the early 90's and then on home consoles like the NES, Amiga and Master System. The simple premise was that two dinosaurs had to clear each level by blowing bubbles to capture enemies and then popping them. Rainbow Islands followed this up with a similarly inspired mechanic involving Rainbows that could be collapsed on enemies heads to do away with them.

Both Bubble Bobble had one thing in common, initially simple gameplay that gave way to hidden complexity. At first it appeared you just needed to clear each screen to complete the game. But after playing for a while a number of different patterns emerged. The way different power-ups were granted, the score of killing enemies and collecting items, the hidden location of extra collectable and the way to access hidden levels. To the casual player these remained hidden, but to those building a high score campaign they became meat and veg.

For me, these games were simply magical. More because of the time of my life than anything else.

For me, these games were simply magical. More because of the time of my life than anything else, they arrived just as I hit teenage years and would hang around a local video store with arcade games at the back. The levels and secret became the currency of the small group that congregated there every weekend. New discovered about how to trigger the large end of level prizes or control the colour of diamond you are awarded were whispered amongst my peers.

If you've seen King of Kong you'll know what I mean, and if you haven't you really should. Donkey Kong, like Bubble Bobble, Rainbow Islands and Parasol Stars looks simple, but is actually packed full of secrets and tricks.

Parasol Stars carries all of this forward in grand style. The new weapon of choice is here an umbrella. This can be opened to slow the player's descent, flapped to kill enemies or held aloft to collect stunned baddies and bubbles. It all sounds complicated, but once you get going it flows as simply as Bubble Bobble or Rainbow Islands ever did.

Parasol Star's folk lore status was all the more for the rumoured but never pictured arcade machine. In absence of a coin operated version, we turned our attention to the Amiga and PC Engine versions available to us. Never mind what the game was like, this was exciting for the simple fact of being the next Bubble Bobble game.

The Umbrella gives Parasol Stars a more combative feel than the floaty Bubble Bobble or skippy Rainbow Islands. Enemies are flung around the screen rather than popped or swept away. The also means it is harder to pull some of the old tricks. Particularly difficult is getting a dead enemy to land in a certain spot once they have been killed - something that is essential to control the colour and type of item or power up.

The levels return to the more self contained variety of Bubble Bobble, as opposed to Rainbow Islands vertical challenge. I liked this retrograde step, it reminded me of mapping out ideal routes or the flow of air currents through Bubble Bobble levels. It's the intricacies of these games that really seem to creep inside my head.

For a start it's an original game.

While Parasol Stars never clicked with me as well as Bubble Bobble or Rainbow Islands, it is so much better than the torrents of other sequels (Bubble Memories, Double Shot, Evolution and the like) - for a start it's an original game. At the moment the best way to play it is on a PC Engine or Amiga, but here's hoping for a release on the DS or Wii-Ware.

You can support Andy by buying Parasol Stars