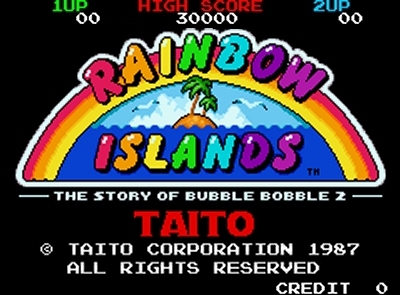 This is not an easy cash-in follow up, that would come later with Bubble Memories and Symphony. Rainbow Islands is a full reimagining of its forbears play mechanic with rainbows replacing bubbles.

The game allowed itself a denser and initially more awkward control scheme. Rainbows could be both walked along and broken over enemies, which meant a new player would often struggle just getting around the screen. The experience was not dissimilar to the first few outings with Gran Tourismo, spend pulling unintentional donuts around the track.

Like the driving game, with time the simplicity and single minded design of the control mechanism wins out. The player realises that it works this way for a reason, primarily to give them a more open and flexible play experience. After a while many of the familar bubble techniques can be performed with the rainbows and the player can deftly traverse the playfield.

Once this play scheme is proven to be a success Taito have then taken a leaf out of Nintendo's book and turned their attention to replay-ability. Unseen in the playfield are levels of interaction that, once unearthed, make repeated plays essential to obtain a truely high score.

Once this play scheme is proven to be a success Taito have then taken a leaf out of Nintendo's book and turned their attention to replay-ability.

Bonuses: In addition to bonus items awarded for each kill, the player soon discovers that each level is litterally strewn with hidden items that can be unearthed by dropping rainbows at ground level.

Power-ups: Much like bubble Bobble, there was a whole world of causal pipes delivering a complex hierarchy of power-ups.

Diamonds: The final stroke of genious, playing to the strength of their theme was the ability to collect rainbow coloured diamonds. Moreso once the player realises that the colours awarded can be controlled by a carefully placed kill, and that collecting them in order was the only way to finish the game proper.

These add up to a rich play experience, much as the levels of tuning and driving does in Gran Tourismo. And the genius of it all is that they exist in the background of the play, tempting mini-achievements that can be drawn on at will, but never intrude on the main mechanic of rotund-ex-dragon-hero and his rainbow.

You can support Andy by buying Rainbow Islands