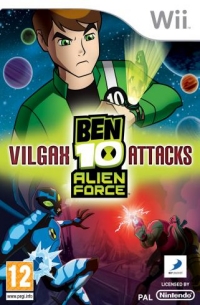 Ben 10 Alien Force Vilgax Attacks paints by numbers and misses its opportunity to use the Wii controls to create something more novel. Dinosaurs, special powers and a teenage protagonist tick boxes for young players, but it's less inspiring for the parents playing along.

The Earth is under attack and you, Ben Tennyson, with the capability of transforming into ten different aliens, stand in their way. That's the premise of Ben 10 Alien Force Vilgax Attacks, based on the hugely successful kids series. I strapped on the Omnitrix (well, Wii-mote) to check it out.

In fact that was my first thought with any Ben 10 game, surely the coolest thing in the world would have been the ability to incorporate a wrist-watch like device with the Wii-mote. Actually being able to slap your wrist when wanting to change into an alien would have created a more engaging experience, after all it's the device any ten year old kid would want for getting out of scrapes and intimidating siblings. Tragically, the game hardly uses the Wii's motion capabilities at all in what is a pretty average third-person platformer.

For those who don't have kids Ben Tennyson is an average kid who discovers the Omnitrix, an alien device that gives the wearer the ability to transform into one of ten different extraterrestrial forms. It's no surprise that a committee created Ben 10, the merchandising opportunities alone are enough to give most parents nightmares. Transformers only usually transform into one other thing, Ben transforms into 10.

Parking my cynicism for a moment, the game opens with Ben and his friends being confronted with an invasion of the Earth by Vilgax - basically Cthulhu dressed as Conan the Barbarian. Ben leaps into action only to encounter Professor Paradox, a Doctor Who clone complete with eccentric English accent (David McCallum no less), who takes Ben and co back in time to prevent Vilgax's plan from ever coming to fruition. These cut scenes actually look quite cool and definitely reflect the cartoon series, spurring you into action for the game itself.

The most fun is Humongosaur for reasons that should be perfectly obvious from his dinosaur name.

As you might imagine, ten different aliens mean ten different abilities, the trick being that when you encounter a puzzle on a level you keep swapping alien persona until you get the right one for the task.

Which to use is often signposted and helps keep the difficulty level acceptable for younger players. For more experienced gamers though you'll be thinking 'ooh, another drainpipe, I guess I'll become Spidermonkey again then'.

Puzzles are solved very easily in a manner which makes you think this either aimed at a level below Mario and Zelda's average player age or simply not much imagination went into them.

Fighting bad guys is also fun to try your different aliens out on. Swampfire, for example actually sets fire to bad guys which is amusing to see them burn before the flames magically disappear. Although maybe slightly at odds with the younger audiences sensibilities.

The most fun is Humongosaur for reasons that should be perfectly obvious from his dinosaur name. You could do a Rampage clone from that character alone. Perfect for prehistoric obsessed youngsters.

Vilgax Attacks should work well for players up to the age of about twelve.

Bosses are sometimes fiddly and a bit repetitive, but like all good fighters once you've sussed the attack-pattern finishing them off is quite easy.

It's a shame there's no Wii-mote gestures like in Red Steel or Indiana Jones and the Staff of Kings to imitate throwing a punch, just hit A and B. This is a huge wasted opportunity, like the Omnitrix peripheral there should have been the ability to give this game a real edge in fighting, cos Ben does get into fights a lot.

Vilgax Attacks should work well for players up to the age of about twelve. Anyone older will notice the obvious game play, and tedious controls. A missed opportunity for peripherals and game play leaves you feeling a little indifferent.