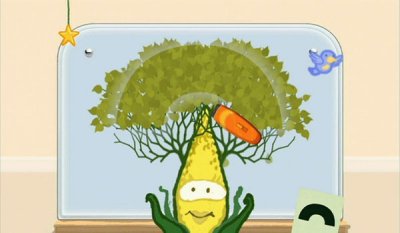 My kids get used as guinea pigs. Not literally you understand, but when it comes to video games. As such my daughter has ploughed her way through all manner of makeover game from the recent DSi camera touting Hair Salon to less technically able Imagine Beauty Stylist.

It was instantly clear that Bonsai Barber grabbed her imagination even from its opening screens. By clearing aside the need to realistically create the modern fashionable face, makeup and hair, Bonsai Barber offers a much more imaginative experience. For here, we are styling plant life rather than upwardly mobile Holiwood-a-likes.

The big difference is not in the subject matter though but in the games physics. Rather than slapping on wigs and spraying on makeup, the Bonsai Barber player uses the Wii-mote to manipulate realistically modelled hair - although said hair is actually leaves and branches.

I was back into the almost heavenly experience of spending my time identify fish, collecting coins and mapping out the various dives.

Although I may be unusual in this, the game hooked into my obsessive enjoyment of trimming our privet hedges. There, as here, I'd happily spend hours snipping and clipping until I had achieve the perfect silhouette. Thankfully though, on the Wii if I inadvertently cut a supporting branch, revealing an embarrassing bald patch, I can just give it a spray to make it instantly regrown.

As my daughter and son got to grips with the game, I was surprised to see that even the younger could pretty much work the Wii-mote pointing controls that are often the bane of our family gaming. Although limited by the finickety pointing mechanic the Wii can deliver my kids soon cottoned onto the fact that they needed to rotate the controller as well as point to achieve the perfectly placed snip.

Half an hour of happy coiffeuring and we had burnt our way through the game's first day appointments. Then, like Brain Training et al., we were done for the day. We could book in clients for tomorrow's play and then either turn off or practice on pot plants. The perfect excuse to turn the console off in favour of something less electronic for a while.

Bonsai Barber is Wii-ware done to a tee. Quick to start, and simple to understand, but with enough real game physics and development to make the experience compelling. Along with the likes of Maboshi Arcade, Bonsai Barber highlights how good Wii-ware could and should be.

You can support Andy by buying Bonsai Barber