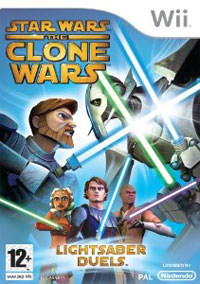 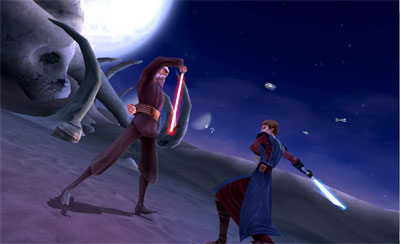 Star Wars The Clone Wars: Lightsaber Duels started slow. The single-player lacked the Lightsaber controls my son and I hoped for. The saving grace came with the multiplayer which, although not perfect, delivered those Duels we had waited so long for.

Star Wars The Clone Wars: Lightsaber Duels could have been the promised land for my family and the Wii. The thought of using the Wii remote to swing, clash and fizzle our way to victory is what the hardware was designed for. Or so we thought.

It turns out that its more a case of waggling the force rather than wielding it in this case. Taking its cue from the successful cartoon series, Lightsaber Duels puts you in command of Anakin and his young apprentice Padawan. Set between Episodes II and III we were foiling a plot by the Separatists to steal Jabba the Hutt's son.

In all honesty, even though my son enjoys the cartoon series, we were never that engaged with the plot itself as it had to work in a way to enable as many Lightsaber battles as possible. What we did enjoy though was the presentation that's been lavished onto this Wii release.

Everything from the cut-scenes to the in-game dialogue looks and sounds to be given as much care as the actual TV show and it pays off incredibly well. Each preface to a duel drew us into the experience with the stunning visuals and dialogue recorded specifically for the game.

Everything from the cut-scenes to the in-game dialogue looks and sounds to be given as much care as the actual TV show and it pays off incredibly well.

When Obi-Wan starts bantering with Anakin or taunts Dooku it got us all pumped for taking down the enemy and wielding the light saber just as in the films. Sadly, the game hasn't been designed to pick up the authentic pace set by the visuals. Instead of swinging around like Qui-Gon or Anakin you have to flick the Wii Remote from side to side to land an attack.

Talk about under whelming. It reminding more of playing Track and Field with a 2-button joystick than using the force and brandishing a weapon for a more civilised age. It took ages for us to get over the initial disappointment and limitation of the motion controls. When we did, my son found it too simple to have any sense of immersion as it was case of using the same sequence of attacks to defeat any opponent.

Taking control myself I found the same problem and Lightsaber Duels revealed itself to be nothing more than a very simple fighting game. All you do is fill up your Force meter, use a Force strike and repeat until victory. Hardly the stuff of Jedi masters.

Duelling with my son next to the big screen is as close as we'll get to a real Lightsaber battle for many years.

The system gets a little more complex when enemies start jumping out of the way or using parries. Even then it felt like either blind luck or simplistic logic to successfully perform these moves - and this is coming from my son!

The single-player mode is entertaining enough and thanks to the level of presentation it became an entertaining escape for a few hours over the week. What really gave the game a boost was the multiplayer. Here, the preset combo's and repetitive nature of the combat removed itself and the fighting became much more tactical and fun.

In fact the multiplayer is the single reason why we still own this game today. Each battle can go on for lengthy periods - in an awesome way - and the surrounding environments really put you into the experience. Duelling with my son next to the big screen is as close as we'll get to a real Lightsaber battle for many years and it felt epic even though the controls were still limited.

In fact the multiplayer is the single reason why we still own this game today.

With this saving grace, Star Wars The Clone Wars: Lightsaber Duels redeemed itself from the disappointing single-player mechanics. It still isn't enough to satiated the Star Wars lust for a proper Lightsaber battle game. But while we wait for that day this stripped down version will have to do - and it does, just.

You can support Andy by buying Star Wars The Clone Wars: Lightsaber Duels