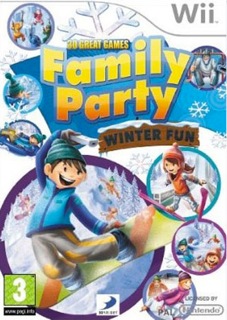 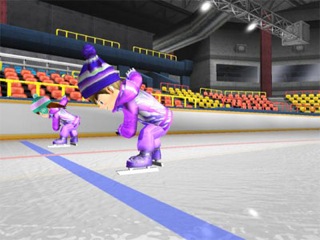 Family Party Winter Fun Wii struggles to rise above irritation and boredom. Although it's not without its successes, for a young family the majority of games leave you trying to figure out how to control them rather than enjoying the competitive winter fun.

The idea of 30 mini-games all with a winter theme isn't a very attractive proposition when you find the darkest months of the year so depressing. But as Mario and Sonic at the Winter Olympics has shown, even the cold and bitter feel of snow felt warm in the comfort of my own home. Unfortunately the same couldn't be said of this budget Wii game and even my fun-loving children found this a deeply frustrating experience.

We immediately found that this was a game best experienced with a large group of people all crowded around the TV as any kind of solo play became excruciatingly boring. Watching the AI flawlessly complete some of these mini-games is a crushingly dull experience and the only reason I could think of to play this way would be to play your favourite game without having to go through a multiplayer session. Sadly, even that option isn't available so playing the game in Challenge, Battle mode or Co-op is really the only way to go.

Usually we don't have any problems with the motion controls but the flaky nature of many of the events turned this experience into a trial of patience rather than any sort of fun.

Each of those options support up to four players and in Challenge mode you pick a room within the game and compete access five different events. Battle mode lets you pick between ten events and is all about beating your friends to pick up first place. This was all easy enough to understand and we found the process of unlocking further events a nice reward for completing our challenge rooms and playing the game. The variety of minigames was also a positive with a range of events covering skiing, slalom and ice canoeing that kept each event 'room' interesting.

Unfortunately, that's about as positive as our experience got as we immediately hit a wall with the Wii's controls. Usually we don't have any problems with the motion controls but the flaky nature of many of the events turned this experience into a trial of patience rather than any sort of fun. One aspect that really bothered me was the lack of information regarding the Nun-chuck the game gave us. Only when a big, game-breaking box popped up telling us to attach the Nun-chuck did we realise that the specific event needed the peripheral attached to the Wii remote.

At other times I was struggling to control the game because the Nun-chuck was still plugged in and the game had failed to inform me that it wasn't needed. It took all my fatherly patience not to erupt in a stream of obscenities at this point - not that my children would have cared as they were also thrashing around in frustration at this oversight.

By the time we'd struggled through half of the events my kids and my other half decided to ditch the game and left me to finish it off.

By the time we'd struggled through half of the events my kids and my other half decided to ditch the game and left me to finish it off. At this moment I began to wonder if the inclusion of Mii's might help bring them back into the game. As so many other games use this feature to make the experience more personal I figured Family Party Winter Fun might do the same, especially as the graphics would suit the Mii's art style. But there was no integration of this feature at all and neither was their any Wii MotionPlus support - something that might have smoothed out the awkward controls as well.

In all fairness some of the minigames had decent controls that we didn't struggle with but when this is the exception then its obvious that the game has some serious problems. It's even more unbelievable when you think of the number of control schemes the game expects players to memorise to play. With the word 'family' in the title I would have expected something a little friendlier, but Family Winter Sports seems to go out of its way to make itself completely inaccessible to younger players. My two boys gave up after valiantly sticking with the game for over an hour, but in the end the only victory the game produced was one for frustration and anger.

You can support Andy by buying Family Party Winter Fun