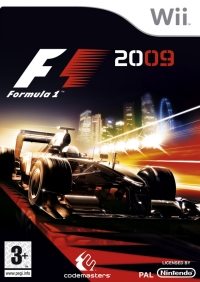 Other GamePeople columnists have reviewed this from their perspective - huh?:
Motoring Gamer (Wii) 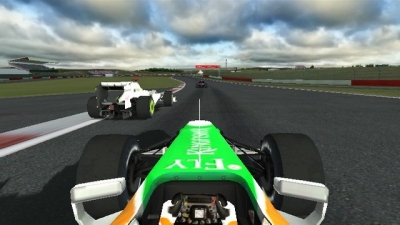 Formula 1 2009 on the Wii captures the feel and excitement of a Grand Prix weekend and, despite being a bit tricky to steer, gives a real sensation of being there. A must for the motor racing fans among us!

My parents-in-law are great. I'm not just saying that, they're genuinely good to spend time with. A few years ago they gave me one of the best Christmas presents I've ever had - the chance to go for tuition at Knockhill Racing Circuit and then drive a single-seater race car around the track. I'm a huge motorsport fan, particularly Formula 1, so this was just brilliant.

The memory of that day often comes back to me when I'm watching a Grand Prix on the television, and I think how great it would be to try out a real Formula 1 car. I know that's not likely to happen, but I can dream anyway! My parents gave me yet another great present last Christmas, Formula 1 2009 for the Nintendo Wii. It's not quite the same as driving the real thing, I imagine, but it's very, very good fun.

Driving round the circuits I've seen so often on the television is a strange experience. I'd done a couple of them before from playing other racing games but never the full season and never some of the specialised tracks like Singapore or Monaco. It is amazing, though, to see the same views as I would on a Grand Prix weekend and to finally understand how the track fits together. I've always struggled to get a full sense of the track layout when watching a race, but you do get to know it pretty well when driving it.

We can understand a little of what drivers must feel during qualifying now.

I'm one of those people who has to really concentrate on driving games, probably because I'm not that good at them! Playing Formula 1 2009 on the Nintendo Wii was a late night affair after the kids and even my wife had gone to bed, although that tended to be because she would want the TV otherwise! Formula 1 2009 is pretty involved too, especially if you choose to tackle a full race weekend, so it made sense to find a time when I could give it my full attention.

I've hinted at it already, but there are several options for going racing. The quick start will let you jump straight in a car and take the place of one of the current F1 drivers. If you're a fan of a particular team this is the perfect way to have a go of virtually driving their car. You can opt to play a race wekend, from practice through to the race itself. Or you can try to aim for the championship over one season or three, building up your reputation and skill as you go. There are plenty of options to keep you going and, if you happen to be an F1 geek, to let you imagine what a real F1 career must be like.

I was talking to my friend the other day who also got Formula 1 2009 for his Christmas and we agreed that we can understand a little of what drivers must feel during qualifying now. Obviously the tension is nowhere near as real for us, but you do finish a qualifying session and wonder whether your time is going to get you through or not!

There are a couple of things that didn't quite sit right with Formula 1 2009. Firstly, all the cars have KERS. Every team was allowed to use KERS last year but not all did. Secondly, every car seems broadly competitive in comparison with the others, while Brawn actually started last season on brilliant form while Ferrari and McLaren started pretty poorly.

The races, the tension of qualifying, and being able to drive around the tracks I've watched others navigate so often are all fantastic!

The problem with this kind of game is that we know how last season went, while Codemasters couldn't possibly know how it was all going to pan out while they were coding the game. Perhaps the best option was just to say that since every team could use KERS then it should always be available in Formula 1 2009, or that rather than guessing who was going to have the fastest car they should all be similar in performance. These things, though, are more oddities than annoyances and didn't ruin my gaming pleasure at all.

I will say that there's one thing I really struggle with, and it's an important element of any driving game: steering. I find that I overcorrect at corners, or that I weave down the straights as if I've had a few too many to drink before stepping into the car. I think this is because the Wii controller isn't attached to anything - I find the same thing when I'm driving on the iPhone.

Formula 1 2009 does a great job of capturing the feel of the sport. The races, the tension of qualifying, and being able to drive around the tracks I've watched others navigate so often are all fantastic! Now if only I could stay out of the barriers a little more often!