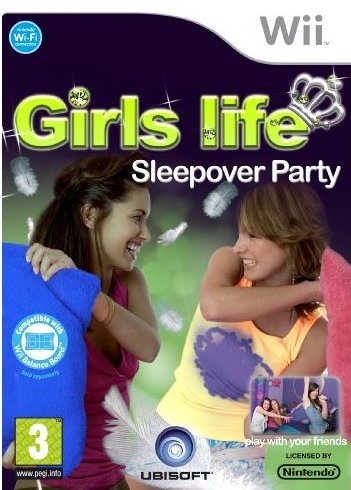 Girls Life Sleepover Party Wii offers a novel game around which to theme a birthday party - but probably for younger girls rather than those pictured here.

At age 6 my daughter has already been to one sleepover and has another coming up in a couple of weeks. As a naive first time parent, I had no idea this phase would come around so quickly. I thought I had at least a few more years before sleepovers became the norm. Actually I don't really mind her going to them, as long as I know the family where she's going.

It's the prospect of hosting a sleepover that fills me with dread. Five or six over-excited seven year olds who probably won't go to sleep until way past my bedtime. Then, goodness knows what unearthly hour they will wake up in the morning. And what do you do to fill all those hours of party?

I found it hard to keep four little girls amused for two hours at my daughters last party. There are only so many movies they can watch surely? Well, Bingo! Girls Life Sleepover Party for the Nintendo Wii.

Girls Life Sleepover Party is chock-full of great party games that will keep them amused for hours - well ok, an hour or so! There are a few options in setting up your game, you can either do quick start which picks a party theme and games at random, or you can choose the theme and games your self, using 'plan party'.

There are some nice themes like: Beach; Halloween; Fashion and Hollywood. For each theme there are a number of games you can choose. This controls how long your party will be. The quick start party we chose would have took about 45 minutes to play, depending on the number of party guests you have.

Girls Life Sleepover Party Wii is hosted by Aimee, who is a reassuringly down to earth teen in jeans and a hoodie (although you can change her outfit to something less appropriate if you want to!).

The Girls Life Sleepover Party games vary between ones that you play in the room with pens, paper plus other props and ones that use the wii-mote for on-screen play. This ensures a nice balance; keeping a bit of group interaction and keeps everyone from staring at the TV the whole time. During our party, we played things like consequences (with pen and paper), cookie decorating. Both of which require a bit of forward planning.

Don't panic though, you can pre-plan your party and click save it until you need it. There are also role play and dancing games and a version of Wink Murder called Wink Freeze. There are also a few games that use the Wii balance board, so if yours is gathering dust under the sofa like mine, this might be a good chance to give it an airing.

Girls Life Sleepover Party Wii is hosted by Aimee, who is a reassuringly down to earth teen in jeans and a hoodie (although you can change her outfit to something less appropriate if you want to!). She talks the players through the party and each game step by step. So really no parental involvement needed at all!

I'm actually going to hide this game otherwise I know my daughter's pleas for a sleepover will gain even more momentum with a themed Wii game in the running as well. I will quietly consider my options for her next birthday. As one mum at school said, perhaps it's better to get it over with now when they are still little than later when they'll be up all night!

This game is a great little party tool; whether older girls will still enjoy some of the simpler games I'm not sure. Making face masks and doing a make-over are games that still have a bit more of an older feel and require a bit more skill and concentration.

I really like the way this game combines the modern console age of party games with more traditional ones done in a group.

Aimee is apparently 16 and 'can't wait to host her own sleepover', I'm pretty sure 16 year olds would find this a bit young for them. Maybe it follows the same principal as teen magazines like Just 17, where most readers are about 14!

I really like the way this game combines the modern console age of party games with more traditional ones done in a group. I'm guessing that sleepovers are a more common party theme in the USA than it in the UK, which leads me to my only criticism. Why does it have to be called 'Sleepover Party'?

Most of the games and party themes would be appropriate for any girl's birthday party, sleepover or not. Apart from referring to the game as a sleepover party in the voice prompts there are no other references to it or games relating to it. Parents should feel they can buy this without having to sign up to host a sleepover in the process. This is the only part that seems a little restrictive in an otherwise great game.

You can support Andy by buying Girls Life Sleepover Party