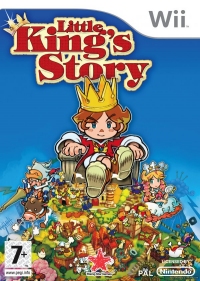 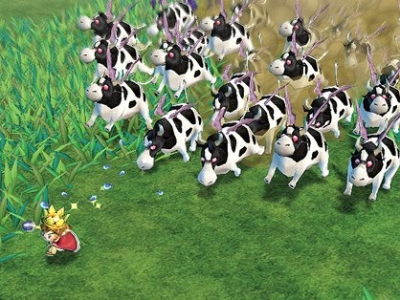 Little King's Story Wii lays out strategy on a massive scale. My family was hooked - playing and watching every evening - until we'd finally put in enough effort and hours to save the day.

With its cartoon-like graphics and gentle learning curve Little King's Story could easily be dismissed as a kid's game. But there is more than enough to the game to keep the parents amused too. It's essentially a real time strategy with a playful mischievous heart.

You play as a humble rat catcher boy called Corobo, who one day finds a crown. When he puts it on he finds himself King, living in a small and shabby castle in a small village of carefree adults, surrounded by dense forest filled with Unidentified Mysterious Anima (UMA). Advised by his three trusty ministers, he finds he has the ability to command his villagers to dig for treasure, chop wood and fight enemies.

Minister Howser has a plan to improve the kingdom by training the carefree adults to do specific jobs with special abilities: soldiers for hand-to-hand combat, farmers can open up cracks in the ground, animal hunters with bows to attack enemies from safe a distance.

Developing the training facilities for each job type costs money, so treasure hunting is a constant. Buildings also require new land and the kingdom can only be expanded by defeating the neighbouring lands' guardians, bosses and kings and removing any lingering UMA. Paths will need to be cleared of obstacles (miners can smash rocks, lumberjacks can pulverise huge trees). To access new territories, carpenters are required to build bridges across rivers and build staircases up cliff faces.

The game is real time and each day the King chooses who will form the royal guard, the villagers who will follow him out of the kingdom on the day's mission. The villagers who have not been selected will get on with their own lives and even interact with one another.

It's a huge game. We completed the story in 40 hours and only a fraction of the side quests and other distractions (races with bunnies, table tennis tournaments, changing the pictures on the palace walls, etc). When all the kingdoms have been opened up the map is vast and would take a long time to navigate on foot - happily we construct jump cannons to 'teleport' the Royal Guard to key locations. There are 50 or so enemy types, known as, most of which will be encountered repeatedly throughout the game.

This game is a time sink too. There is always so much to do at any one time.

This game is a time sink too. There is always so much to do at any one time. We could do with some cooks to deal with the surprisingly powerful chickens on the Sunflower Plains, so we need to train some chefs (which costs money) so we need to build a culinary academy (more money) so we need to clear the land currently occupied by a venomous giant mushroom which is proving hard to defeat. We go treasure hunting for the money to buy these things, then on the way back members of the Royal Guard have fallen in love so we need to go via the church.

My family became fully immersed in the story the weeks. We didn't just get addicted to the game, we started to care about our villagers. We knew the names of our favourite and most valuable subjects. When a bridge needed to be built the kids would say, "Get Alice." We didn't refer to The Steel Knight, we talked about Morgan. We hated losing anyone in battle, even though we knew they were likely to wash up on the beach the next day with nothing more than a headache.

At one point, it becomes apparent there's a dark undertone. People know more than they are letting on. Howser, our trusty advisor, drip-feeds us information and reveals the world is suddenly larger than we first thought. We wake up in the morning to discover trusty Records Minister Verde has been watching the King sleeping. Ginger the art collector seem to know the story is being watched on a screen, Kampbell the unhinged priest tells us God will punish us, Skinny Ray tells us the sky is falling down and what's with all the earthquakes?

During a quest we are required to answer the question, "Someone is this land's big problem. Who is it?" We promptly went into paranoid mode, suspecting everyone. I still can't decide whether including this question was a stroke of genius, designed to feed on my paranoia, or something I just took a little too seriously. Either way, this is a story (the clue is in the title) that is being played out with a definite and logical ending, which is particularly satisfying.

Although Little King's Story only supports one player at a time, without even the ability for a second player to point on screen, we never had arguments over whose turn it is to be in the 'driving seat' because it is such good fun to be a spectator.

In our individual games we had our distinct strategies, which is probably why we didn't get tired of watching one another playing. Charlotte is keen to fully develop the kingdom as early as possible and was prepared go on as many treasure hunting missions as cash required. Whereas her dad's priority was to get as many of the more exotic job classes (Wizard, Doctor, Steel Knight) as possible, funding the training by raiding the neighbours' National Treasures.

There is a Little King shaped hole in our early evenings now.

Eventually we complete the game and followed the final chapter in the story. It was quite a marathon, and perhaps why we haven't replayed it. But there is a Little King shaped hole in our early evenings now.

In fact, our youngest keeps asking when we will be able to buy Little King's Story 2: we keep telling her this just isn't going to happen while secretly hoping that maybe, just maybe it will.

You can support Andy by buying Little King's Story