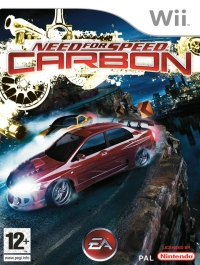 OK, so I admit I was a little apprehensive at the brash boy-racer ethic of this game. Being slightly older, emphasis on the slightly here, I never really got into customising my hot hatch. In fact I didn't really learn to drive until my mid twenties. Thank god I wasn't born a few years later because I would have been well out of my depth if my peers were into this sort of thing.

However, after just a few minutes I found that my apprehension was unfounded. A nice young lady first reminded me of the rules of the road, before introducing me to the game proper. I jumped into a quick race to get things started and get a feel for the cars. After wrestling with the controls, and realising that the Nun-chuck I had been instructed to plug in was not required for the default Wii-mote control scheme, I was able to get around the track keeping up with the other cars.

I say other cars for a reason here. It really does feel like you are racing the cars, rather than anything human. The cars are firmly the stars of the show, with the merest of silhouettes to represent their drivers. Even with the full motion introductions of each opponent, for some reason when you hit the track it is all about the cars. The career mode epitomises this, as it is all about customising and enhancing your car, the driver doesn't even feature. This is by no means a derogatory comment; in fact it seems to fit well with the buzz of the real world community that surrounds these automotive statements of personality and character.

It really makes you feel like you are cruising around an open world, rather than jumping disparately from race to race.

The main game focuses on a career mode where you work your way around a world map, winning races and taking over territories. Eventually you will have won all the races in an area and be ready to take on the boss challenge. You then face the territory boss in a double race down Carbon canyon; once following trying to stay as close as you can, and once being pursued trying to get as far away as you can. If you are able to stay closer to him than he is to you, without coming of the road, the territory is yours. This draws on the tried and tested Need for Speed formula, and does its job well.

Carbon extends this basic formula in a number of different directions. A new 'muscle' class to flesh out the cars with some raw uncontrollable power, crew team mates to assist and race with you and a new auto-sculpt feature for getting just the right look for your latest wheels. The new car class and sculpt features do pretty much what they say on the tin. The biggest change to affect the core game is the ability to build up a set of team mates. Each has their own ability.

Drifters will drive in front of you to give a slipstream sling shot speed boost. Scouts will hunt down shortcuts to speed your progress. Blockers will drive up ahead and block out the other racers at an opportune moment. Once they are selected for a race you can control when they do their 'thang' with the D-pad. It is quite novel being able to get other cars to block or drift in front of you. However, this soon wears off as you discover in terms of practical racing they are often more of a hindrance than a help. Those two extra cars often serve to clog up the track with their flared wheel arches getting in the way at crucial moments.

The game as a whole offers plenty to keep you busy. The career mode takes a good 14 hours to get around. Then there are the mini game challenges whereby you can collect racing cards. On top of this there are the 40 or so cars to unlock enjoy and customise. The variety of the races themselves is pretty good, which brings us onto the drift stages. These are a love them or hate them affair because they have their own entirely new control mechanic explicitly designed for the purpose of drifting around the snaking track. Until you realise this it is a bit unnerving as your previously well behaved car starts hanging its back end out all over the place. Once the change in physics clicked for me, these turned out to be some of my favourite races. They are perhaps the best demonstration of the beauty of the Wii-mote's true analogue controls, ideally suited to the subtle adjustments required as you performed your balletic manoeuvres around each corner.

Now about the controls, as I mentioned there is the suggestion to use the Nun-chuck when you first start the game, but the default control is just the Wii-mote. You hold it sideways, NES style, and turn it like a steering wheel to drive. I must admit that I am someone who enjoys and perseveres with analogue controls; I played Indy 500 on the Amiga with just the mouse! However, I really do think that this control method is rather good. It provides the subtlety needed for slight corners, quick and responsive lock to lock movement, a hard lock with the A button and a useful on screen indicator to tell you when you are back to centre. With a bit of sensitivity adjustment and a bit of practice, this should be able to suit most driving styles. The only problem I found with the controls was that when you need to use the menu it still thinks you are holding the Wii-mote vertically. It's a minor point but really one that should have been ironed out in play testing.

Graphically, this is pretty much the Gamecube version. It may just have been my heightened expectations since seeing Need for Speed on the 360, but to my eye the action seemed a little choppier than it did on the Gamecube. On occasions my racing was slightly interrupted by a drop in frame rate that made the game feel a little clunky at times. That said, the great art direction and night time lighting work together to create a real sense of atmosphere.

Things are no less polished sonically. The voice work on the part of the police radio, and competitor drivers is confident and well executed if a little repetitive over time. The key thing here is that it adds to the sense of personality of each car you are racing. The noise of the street, cars and engines all add to the feel of night time down town racing for which the series is famous.

One of the best parts of the game for me was the sense of connection between the different races. As you finish a race, the competitors take off and you are free to drive around the city. It really makes you feel like you are cruising around an open world, rather than jumping disparately from race to race. This open environment often felt like it had a stronger identity than the racing itself. The individual races seemed to be confused in what they were trying to achieve. They end up being somewhere between Burnout and Test Drive, but without the crashing and damage of Burnout and missing the realistic driving experience of Test Drive.

Overall this is a good game that gives away its launch title status with a slight lack of polish. Its greatest achievement is the more than functional driving control with the Wii-mote and the connected race world. However, given more time I'm sure frame rate issues and a stronger identity would have emerged. It will be interesting to see what the next Need for Speed outing brings to the table, and which consoles it is released on.

You can support Andy by buying Need For Speed Carbon