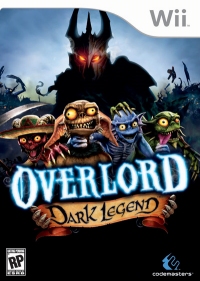 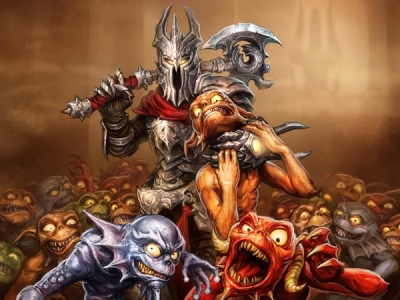 Overlord: Dark Legend Wii combines dark humour with an army of minions to good effect. Its comedy storyline is a little on the short side, but provides more than enough fun to keep you coming back to spread a little more chaos.

Welcome to Gromgard, your father's castle and realm. You take on the role of the sixteen year old youngest child of the local Lord. It's fair to say that you don't really get on with your two elder siblings, but a rather interesting birthday present awakens the presence of evil in your life. And so you go from being a child to being the Overlord.

You'll face all manner of mythical beasts and people as you guide your minions. The main fare in in Overlord Dark Legend is attacking the local wildlife, smashing treasure crates open, and completing quests as you work toward taking over your father's estate.

While all that sounds fairly dark, the cartoon-style 'horror' and violence meant I could play while the children were still up without being accused of traumatising them. In fact, the cartoon style meant it nearly passed muster as a replacement for children's television, so I could play and my eldest was quite happy to watch. For a while, at least.

Perhaps I should have scheduled my Wii time a bit better so as to avoid my wife's Coronation Street fix.

Overlord'shumour is as childish on the Wii as it was on the other platforms. But this works well with the game as a whole and although, perhaps, a bit obvious, it gave me more than a few chuckles. But then I am a sucker for fart jokes and badly acted regional accents. While we're talking about storyline though, it's worth mentioning that it's a bit on the short side. I couldn't tell you how long I played it for, but I did get a bit of a surprise when the game ended. The story is complete, but shorter than the 360/PS3 versions it seems.

Overlord is a great game to pick up casually - there's never too much hard thinking to be done. Nor is there an urgent need to remember what's happened already as the storyline handholds you through everything you need to know. Remembering the story so far will, of course, help with how much you enjoy the game, but if you're just after a quick play that's OK too!

In terms of controls, the setup works very well. The nunchuck controls the Overlord's movements, and you direct your minions by pointing the wiimote where you want them to go and sending them off to do your bidding. I did end up with a sore arm from pointing at the telly for long periods of time, but just leaning against the chair arms soon put and end to that.

It's not quite evil enough.

One small problem with casual play though, I was never quite sure where the save points would be. If you quit between saves you lose everything since the last save, so a couple of times when I needed to stop I had to face losing my progress. Perhaps I should have scheduled my Wii time a bit better so as to avoid my wife's Coronation Street fix! I think the saves take place whenever you change area on the map or complete a chapter of the game, so very quick play sessions aren't quite going to work.

If there's one complaint I have about Overlord: Dark Legend, leaving aside the length of the story, it's that it's not quite evil enough! That might seem like an odd thing to say, but you wander round looking like Sauron from Lord of the Rings, with a sidekick who's constantly telling you how evil you are and how you're trying to spread that evil around, but somehow it just feels like a normal task-based game. There were points where I thought I was actually trying to help the locals rather than bring them under my rule.

Overlord: Dark Legend is great fun, and the storyline has plenty of laughs.

I remember playing Black and White on the PC where you have free reign to oversee your people in any way you choose, although your choices make you either good or evil. I have to admit that I was evil more often than good, choosing to convince my flock to do my will by threatening to burn their houses down, and I guess I expected the same kind of scope in Overlord - especially with all those 'Let's spread a bit of evil' comments.

That's not to say the game's bad. It is in fact very enjoyable to play and probably gets the good/bad levels just right for a younger audience. It just didn't quite work in my, potentially twisted, mind.

Overlord: Dark Legend is great fun, and the storyline has plenty of laughs. It is, however, short and doesn't quite live up to the evil you're led to expect. That said, there's more to like about this game than to dislike. It's well worth a look.

You can support Andy by buying Overlord: Dark Legend