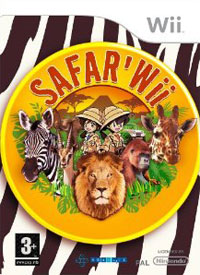 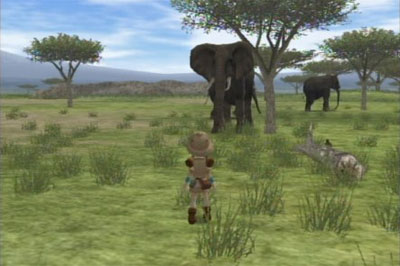 Although Safar'Wii wasn't the safari experience I expected, I learnt a lot about creature tracking. It looks the part and for those who want to spend hours tracking animals it's ideal. With my kids finding it too slow for them though, it was left to me and my wife to take on the challenge.

There's not many things that my kids like more than going to see animals at the farm. Safar'Wii promised a much more exotic ride, taking us to the plains of Africa to deliver a detailed virtual safari that would just as awesome as the real thing. Predictably both my kids and I were very disappointed with Safar'Wii's offering which felt constricted by linear design and silly minigames.

This fixed route through the game's fictional Animal Island meant any sense of freedom offered by the visual was quickly crushed. My kids loved the huge vista's Safar'Wii offered and it's fair to say that the sprawling plains, wide-open lakes, the distant roaming herds and the vegetations of the game looks really impressive. Impressive that is until you try to actually move further than 20 paces from your starting location. Invisible walls are present at nearly every moment and curtail any sense of an open world.

Leaving the car to investigate these signs offers some reward with the appearance of the tracked animal.

The game has a linear style - starting each game day at the camp and then being driven along a road by a robot. No native guides, no experts, just a 'quirky' little robot that was endearing for approximately five minute before everybody in the house found him utterly annoying. During these sections it's your job to keep an eye out for signs of animals and any collectable items that only artificially extends the point of playing the game.

I was disappointed that we were looking for signs of animals and not actual animals themselves. My children were losing interest quickly - I kept expecting the game to throw out a wildebeest, lion or something, but it didn't. With the endgame being to find 21 animals I can understand why the focus is more on tracking animals than admiring them, but putting a bit of eye-candy up on the screen now and again would've been nice too.

The tracking consisted of observing dust-clouds or shaking shrubbery by pointing and clicking with the Wii remote. You don't deviate from the usual path and every day in this odd Animal Island turns out to be exactly the same. Leaving the car to investigate these signs offers some reward with the appearance of the tracked animal but these reveals are far too rare. All too often there's nothing to photograph and going through two loading screens just to get back on the road frustrated my eldest son so much that he gave up after only two instances of this happening.

All through these sections I was disappointed that we were looking for signs of animals and not actual animals themselves.

As soon as requests come in from your editor to make the photography trickier, I felt the game really fell off the cliff. The challenges require far too much tedious game play and when you compare this title to one like Jambo Safari it just feels half-baked.

With such restrictions placed on exploration and simple game play, Safar'Wii falls between two stools. Visually impressive on the Wii, but without the level of access I wanted to those gorgeous vistas. While Safar'Wii recreates the experience of animal tracking authentically, for my family this was a little too life like. We prefer our imported copy of PS3 Afrika as well as Endless Ocean on the Wii.

You can support Andy by buying SafarWii