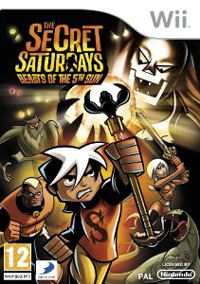 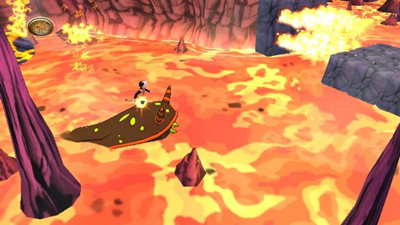 The Secret Saturdays Wii does enough to entertain fans of the Cartoon Network show. There may be more accomplished on the Nintendo Wii, but novelty of the TV program is enough to keep most families playing.

Based on the hit The Secret Saturdays TV series on Cartoon Network, The Secret Saturdays: Beasts of the 5th Sun for Nintendo Wii puts you in control of Zak and the Saturday family as they explore the globe to discover and protect lost Cryptids and stop Argost from destroying the Earth. The traditional 2D platform mechanics were good fun for everybody in the family and if your kids have any interest in the Cartoon Network series then they are going to love this experience.

Most videogames based on a TV series are usually horrific creations that consist of badly-developed mini-games - so it’s refreshing to see Beast of the 5th Sun adopt a traditional 2D platformer style that looks and plays really well. My kids loved the different levels that the game offers and although it didn't look to do anything particularly special, I was happy to see the game offering a varied experience.

Playing as Zak Saturday the hook of the platforming sections is the grappling mechanic which enables you to swing from the ceilings and floating platforms. The controls felt quite natural on the Wii and although my kids had a hard time getting their timing right in the beginning, it soon became easy to progress through the levels. I found the controls myself to be quite responsive and only in the beginning did I find jumping and grappling having awkward moments. Platformers are unusual beasts at times and it can take a while to warm to their individual nuances, something my kids didn't seem to have the same issue with.

The controls felt quite natural on the Wii and although my kids had a hard time getting their timing right in the beginning, it soon became easy to progress through the levels.

What was more important to them were the characters of the TV show appearing accurate and having the same voice actors. Nothing ruins a licensed game experience more than the sound of an actor trying to impersonate who should really be voicing the characters, but the cast of Secret Saturdays is all present and correct here.

A neat touch that adds a bit of variety to these 2D levels are the Crytids - the Pre-historic creatures that can be taken over during a level to open locked doors or fight off enemies. Using the Wii remote you target a particular area and order the Crytid to do as you command and my kids loved this type of manipulation of these creatures. Using them for battle was their favourite task and easily the most enjoyable part of the whole game to them.

Another interesting feature is how the game drops the 2D parts and occasionally ventures into a more three dimensional brawler for brief segments. I didn't find this quite as mind-blowing as it should have been and it I could tell my kids were just getting through these sections as quick as possible so they could return to the 2D stuff. The worst part of this section was the mindless enemies you have to face. I never saw them act with any kind of intelligence and they happily stood by as my kids weighed into them without any challenge.

But even if the beat'em up segments were a little poor it did offer a quick change of pace and broke up the experience into more appreciable chunks that my two sons could manage easily.

But even if the beat'em up segments were a little poor it did offer a quick change of pace and broke up the experience into more appreciable chunks that my two sons could manage easily. The range of puzzles of offer was much more to their liking and it’s no surprise that these sections involved taking control of the Cryptids again to remove obstacles or navigate inaccessible areas. In fact I'm fairly sure they'd be very happy taking control of these Pre-historic creatures throughout the entire game if it were possible.

Though nothing about the game is particularly groundbreaking, Secret Saturdays: Beasts of the 5th Sun for the Nintendo Wii is an enjoyable 2D platformer that successfully transfers the TV show to the Nintendo Wii. The gameplay may be a little light for those looking for a more complex challenge but as a children’s videogame it stands above most other licensed properties. If you have kids that love the show or just enjoy entertaining platform games then Beast of the 5th Sun is worth a look.

You can support Andy by buying Secret Saturdays: Beasts of the 5th Sun