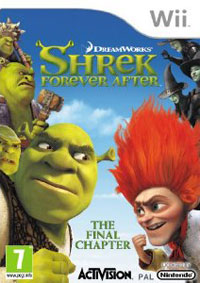 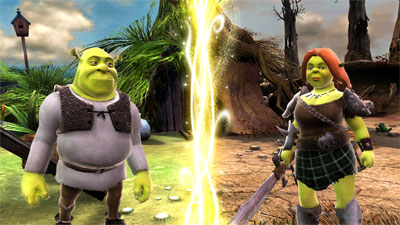 Shrek Forever After Wii is the last platform romp from the final Shrek movie. A good combination of combat and puzzling means that the family can work together to guide Shrek, Fiona, Donkey and Puss in Boots across an alternate dimension. Impressive four player co-op means that everyone can get play at the same time and save Far Far Away for one last time.

Following the same storyline as the film, Shrek Forever After allows you to take control of Shrek, Fiona, Donkey and Puss-in-Boots. Each character has a special ability that makes the game play different each time you play it. It also means that subsequent play-throughs in co-op mode is much more entertaining.

Game play is similar to other movie tie-ins with Shrek moving forward and duffing up the bad guys to obtain power-ups or coins in order to progress. It's pretty simple stuff but no less rewarding for its simplicity. My kids found the game easy to get into and enjoyed the combat of Shrek for the goofy, fun-filled mess it was.

Where Shrek Forever After gets interesting is with the addition of four player local co-op. Here, everyone in the family can take part and the game is much more enjoyable when you have all four roles represented on the screen. Our kids were in stitches at various points because the banter between characters is so funny - just as good as that from the film. The game really captures that Shrek feel from the movies.

Being a game targeted at kids, these puzzles are pretty simple to solve and do repeat themselves further down the line.

The different kingdoms you travel to also give the game variety. The dark kingdom counterparts offer the most interesting backdrops and levels to play through. If you're playing on your own you switch roles as you progress to access the particular special powers you need. It works well and adds a real sense of variety to the game play with different character skills and audio.

These skills come into play during the puzzle segments which were a favourite part of the game for my family. As Shrek is the big green ogre his special is moving large objects around, Donkey can kick open gates or rotate objects and Puss in Boots can climb to inaccessible places. Finally, Fiona can set ablaze flammable objects leading some fun explosive solutions to the puzzles.

It is a game, like the films that a younger audience will get most out of and which does mean some puzzles are pretty simple to solve and do repeat themselves. But to my surprise there were also some pretty difficult challenges as well - mainly for obtaining optional hidden chests or rewards. The mechanics of solving these can get inventive - manipulating a beam of light with an array of mirrors being a stand out moment for me.

Offering a mix of basic combat and puzzles was a good move as my kids never got bored of playing the game.

Offering a mix of basic combat and puzzles was a good move as my kids never got bored of playing the game. When they did wane however, switching to the four player co-op really spiced things up. We could all contribute to the party's success even though our ability and age differed greatly. Some of the boss battles also combined the puzzles with the combat and these were the toughest part of the game - but also the most rewarding.

What I liked most about these parts was how little the game punished you. Many movie tie-in games place restrictions on game play or give you frustrating, instant-death scenarios which just serve to irritate everyone involved. Shrek Forever After excels at making itself accessible and rewarding in just the right amounts.

Though it might seem a short game to some, Shrek Forever After for the Nintendo Wii is perfectly paced for my kids and having a game they can play through and complete gave them such an awesome sense of achievement. With easy to learn controls and four-player co-op this is one movie tie-in that gave an excellent experience not just because it Shrek, but because it was good in its own right.

You can support Andy by buying Shrek Forever After