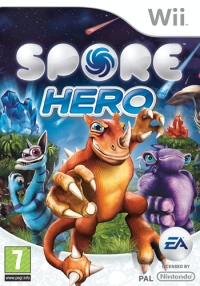 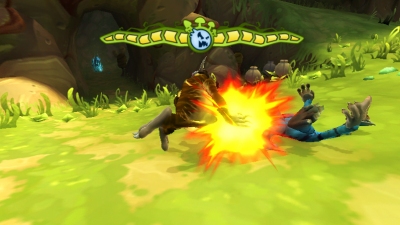 Spore: Hero is an evolution engine dropped it into a classic tale of good vs evil. Its cartoonish graphics and fun gameplay make it a family-friendly that will keep you coming back to tinker.

Back in days gone by my dad had an Escom PC. I don't remember much about it except that it ran at a speed measured in single-digit MegaHertz and had an orange and black monitor. Oh yes, and it ran Sim City!

Maxis' simulation games have always held a bit of a fascination for me. Some of them are terrible, Sim Ants anyone, but they always get a good looking over from me. When Spore came out it seemed so sweeping in its scope and I loved the idea of slowly evolving your character and seeing how they turned out. Spore has spawned a number of spin-off games, including the one I'm reviewing today, Spore: Hero for the Nintendo Wii.

The story's simple - you've crash-landed on a planet, arriving in your shiny blue meteorite. At the same time a glowy red meteorite has also landed, containing your nemesis Zarkhator. The red meteorite, and all that comes with it are 'bad', so you'd better get on with saving the planet then!

OK, so there's a bit more to the story than that, but those are the basics that'll get you going. Classic Good vs Evil stuff.

You have total freedom to place body parts where you like, so your creature can be as sensible or bizarre as you want.

The in-game dialogue is communicated by subtitles rather than voice acting. I'm a bit surprised to find myself liking it that way since I'd usually have a decent voice actor than subtitles. This way, though, you don't have to worry about trying to hear what's happening over the sound of playing children. I think if this had been more the type of game I'd wanted to play when the kids were in bed I'd be leaning more towards wanting spoken dialogue instead but subtitles work well here.

The evolution angle I loved from Spore is here again, but slightly different. You're not working your way up from microbe to space-faring civilisation but improving your abilities by adding new body parts as and when you get them. So you might get a new tail after completing a task - stick it on and see what difference it makes. You can radically alter the shape and colour of your beast and add or remove parts as much as you like since they just count towards a total number of points you're allowed to use.

You have total freedom to place body parts where you like, so your creature can be as sensible or bizarre as you want.

Spore: Hero's style is cute and cartoonish, so this is another one I can get away with playing while telling my daughter it's a cartoon and she seems quite happy to watch for a while. She does realise I'm waving the controller around though and that usually means it's not normal telly!

Speaking of waving the controller around, the way to attack things in Spore: Hero is to swipe the Wii-mote. It makes sense - to hit something in the game you act out hitting it in real life, but when I was in combat I just found it a bit hard to get the hang of. I think simple, controlled movements would work just fine, but I always seemed to end up waving my arms around like crazy. Still, it gets the job done so I'm not too worried about it!

It's fun, simple, looks good, and is easy to play for short periods.

Sometimes though, controller waving isn't enough. There were plenty of moments when I just got stuck. One or two of these were because I couldn't figure out what I was actually meant to be doing, but most were simply because I couldn't get a jumping angle right, or defeat a particularly tough opponent. My solution in these cases is to switch the game off and come back to it later, which usually elicits a comment from my wife about how she thought I was supposed to be good at games! Still, better than putting the controller through the TV, isn't it?

You could say that having to switch the console off because you can't get past a bit isn't a great thing, but the games I enjoy most are those that occasionally present me with a section I really have to dig deep to get past. It drives me nuts if a game's one long slog from beginning to end, but Spore: Hero mixes plenty of easier sections in with more challenging ones so I don't end up getting too frustrated.

Spore: Hero is a good game. It's fun, simple, looks good, and is easy to play for short periods. The storyline isn't blindingly brilliant, but it's enough to keep you going and those tricky sections gave me something to get my teeth into. In short, I like it.

You can support Andy by buying Spore: Hero