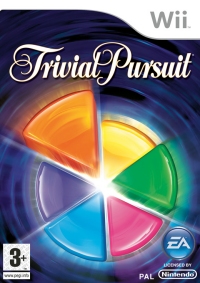 Trivial Pursuits Wii struggles to make sense in the fast paced disconnected world of the video game. It ticks all the boxes but lacks that middle-class competitive spark that made the real thing a roaring success.

Wheels of cheese, crackers, coffee, After Eights and of course Trivial Pursuit. These things go together and still conjure images of 80s dinner parties. If you're extra unlucky it might also bring back memories of Tony Slattery.

Ever since I was young I've played Trivial Pursuit, more often than not on a family assigned team. I've always been fond of collecting facts, of being clever, and Trivial Pursuit rewards such behaviour.

I couldn't grasp the maths of Monopoly, too dull. We never had a Scrabble set, my love for that came much later with Facebook. It was Trivial Pursuit, with its bizarre black and white etchings, cherubim and seraphim that fired my imagination. The iconography of the set remains strong - just look at QI's liberal borrowing from both the board game and Schott's Original Miscellany.

For me, time is one of the game's fundamental elements. It may take a long while to play, but this allows for chatting, arguing and the imbibing of sustenance. On the Wii things feel somewhat different.

Playing the console version there are all sorts of distractions urging you to answer a question. There's a clock, extra points for answering quicker - the speed at which you complete the board in single player dictates your leader board position - and even an annoying game show host. It's all so rushed.

By pushing you through the game the Wii version loses the social sensibilities that made Trivial Pursuit so much fun. There's no time to gloat or argue over the validity of that answer.

Old versions startle younger players with answers like 'The Soviet Union', 'Bucks Fizz' and 'Bobby Ewing' and other 80's idiosyncrasies.

I miss the family contention over particular questions. Particularly when questions have become out of date. Old versions startle younger players with answers like 'The Soviet Union', 'Bucks Fizz' and 'Bobby Ewing' and other 80's idiosyncrasies.

The Wii version has some of this with time stopping in 2008 - but this isn't quite as endearing as my old board game. It's a shame that EA couldn't have new question sets available as DLC, a potential advantage over the board game.

Whereas games like the Buzz on the PS3 match the fast pace action with a similarly rapid game show, Trivial Pursuit feels a little like a fish out of water. It's too fast to be a good board game experience and too insipid to be an engaging console experience.

Trivial Pursuit will remain on the dining table, with its question cards in the wrong order and a red wine stain on the board.

All this means that for my household, Trivial Pursuit will remain on the dining table, with its question cards in the wrong order and a red wine stain on the board. We'll pass on the Wii version and take another Art and Literature questions please - oh, that's the brown one, thanks.


You can support Andy by buying Trivial Pursuits