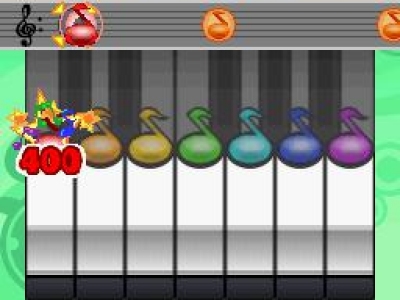 The Imagine series from Ubisoft is the result of their early adoption of the casual gaming market, focusing in particular on the DS. Imagine: Girl Band brings their lifestyle, dress-up, accessorising take on gaming to the tap along fun of rhythm action gaming.

Rhythm action games combine the enjoyment that comes from creating music with the challenge of video game scoring. The player is usually tasked with dancing on a mat, tapping a touch screen, pressing a button, singing into a mic or strumming a fake guitar controller in time with the music.

As with the other games in the Imagine series, the emphasis here is on the younger gamer and in this case younger girl gamers. Accordingly, the difficulty has been paired back to provide an experience that is accessible to the audience. The action is also incentivised much more than its main stream counterparts. There are literally hundreds of combinations of outfits, make-up, jewelry and friends that can be combined to create your own unique band. This emphasis on dress-up is no bad thing as it ensures the gamer always has a reason to play another song.

The main game enables players to jam on drums, guitar, bass and keyboard. Each instrument has its own control interface using the DS touch screen, and each will take a fare amount to time to fully learn. The interactions each work well, and impress as the first DS game to offer such a comprehensive line up.

The rhythm action gaming is a little on the tame side though, with other titles such as Elite Beat Agents and Daigasso Band Bros bring much more creativity to their musical interactions. This route does enable Imagine: Girl Band to keep things simple though (and avoid the difficulty spikes of similar games) and enables younger players to progress more easily.

These Imagine games draw in younger girl gamers by providing an experience that encompasses their supposed favourite lifestyle activities. Shopping, dressing-up and hanging out always play a key part. This my all be a little stereo typical for some households, but there is no denying that young gamers enjoy having a game aimed entirely at them, rather than having to wrestle with older sibling's games that are often too complex or grown up for them to fully enjoy.

A music round can be played in a few minutes, although the interluding decisions about friends, appearance and songs seemed to consume many more hours for our kids. The four person multiplayer option also results in more time being required to play, both in setting up and the actual execution of each song.

The open ended nature of the game means that although players may get through the experience in eight or nine hours, there is plenty to keep them coming back for more long after that. It takes a considerable amount of time and investment to unlock all the outfits, band members and songs.

Young and novice players are well catered for here - both with the difficulty and the clear structure of the game. As its name suggest this is squarely aimed at girls rather than boys. Very young gamers of either gender (particularly those under seven) will find they have to concentrate hard to get through the rhythm action sections. Girl gamers looking for something with a bit more swagger and style may, if they have the required dexterity, prefer the Elite Beat Agents.

Intermediate players may find the experience a little derivative, and those over 13 or so may prefer the more hardcore equivalent - Guitar Hero On Tour DS. That said, there is still plenty here for most family members to enjoy.

Expert gamers, including those outside the sub-14 girl demographic should look to something more substantial for their hit of rhythm action - again Elite Beat Agents DS being the most obvious suggestion.

You can support Andy by buying Imagine: Girl Band