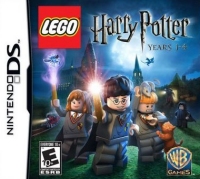 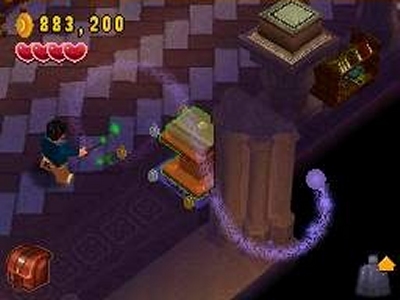 As with the other titles in the series (Lego Star Wars and Lego Indiana Jones, Lego Batman), it uses the franchise's Lego kits as the building blocks of the game. This is something mirrored in by the Lego Harry Potter board game.

Like other Lego videogames, Lego Harry Potter Years 1-4 tasks players with working their way through a series of puzzle and henchmen brawls before confronting an end level boss. The heroes, bad guys and story all take their cue from the Harry Potter films (rather than books - for the purists).

It makes the most of the tie-in with full motion Lego cut scenes that join up the story of the action segments.

Most levels revolve around using Harry, Ron, Hermione and Hagrid's spells - achieved through various stylus swipes - to unlock doors, circumvent fire and generally foil the forces of darkness. Although in miniature and not as expansive, there are quite a few similarities here to the Zelda games - and the dungeon sections in particular.

Players are attracted to Lego Harry Potter Years 1-4 by the combination of two strong brands. The simple joy of watching a living breathing Lego Harry Potter running around is something quite magical. Put this on a handheld machine and add the ability to build a variety of Lego constructions is the icing on the cake.

The game goes on to provide both set piece and incidental experiences that prove both its depth and attention to detail. From the narrated cut scenes to the familiarity of each and every Lego piece encountered, there is plenty to get the gaming juices going.

As the player progresses, they can unlock different playable characters and Lego style add-ons. This, along with the hunt to collect every last brick, adds to the games longevity. To get through the main game will take most people a good fifteen hours.

Lego Harry Potter Years 1-4 has better mid-way save points than other Lego games with players usually only needing 15 minutes or so to reach the next one.

Very young gamers will be attracted to the brands involved, which regardless of their age will have worked their way into their psyche. The magic orientation of the battles make this the only Lego game not to include much gun-shooting - something that may make it more palatable for those with younger children.

There is still a certain amount of hitting, kicking and projectile spells. This is never gratuitous - particularly as the Lego characters don't bleed (or even die) but simply fall apart.

Intermediate and older players should get on well with Lego Harry Potter Years 1-4 and are well served via the simple D-Pad and touch screen controls. Those that already enjoy the Batman comics and Lego are the ideal market for the game, although this is not a prerequisite.

Experts are most likely to take up the challenge of collecting every Lego brick in the game and unlocking all manner of character combinations.

You can support Andy by buying Lego Harry Potter: Years 1-4