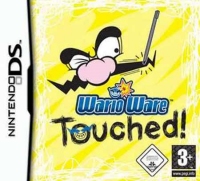 Before the DS was a household name Nintendo had to work hard to convince both the gaming public and critics that their handheld could deliver compelling experiences. WarioWare Touched answered many of these questions in one go, and set their two screened machine on the road to success.

Party games have existed since video games first began. They are typified by their short duration and simple tasks. More recently, the entertainment of mini-game based releases has focused on variety, novelty and quantity of experiences on offer in a single package.

WarioWare: Touched delivers a series of quick fire mini games. Each game is a riddle in its own right. The challenge is to make the connection between the one word instruction, mini-game visuals and a real world task. The written and graphical clues are such that any player young or old should be able to take a guess at what they need to do.

WarioWare Touched adds to this already imaginative pool of games, previously seen on the GBA and Gamecube. Some levels focus each micro game on tapping, whilst others require you to swipe the scene appropriately, then there are those that require sound or blowing input via the microphone. This variety of interaction works well with the one word clued puzzles, there are simply so many options that you have to think quickly to apply the right input in time.

The focus on this extra variety, possibly coupled with the DS launch release date, mean that this is one of the shorter WarioWare experiences. But as with other games, you can still revisit favourite challenges for repeat plays and increased scores.

The touch, tap, swipe, spin and blow input is used with mind bending and hilarious results. Popping bubbles to reveal a naked Greek statue, or dragging an iron over a crinkled shirt make for some memorable gaming moments. But more than these individual highs, it is the overall quality of each and every level that makes the game such a joy to play.

Once you reach the end levels, where all the different styles of input are thrown at the player in quick succession, WarioWare: Touched makes mince meat of even the most hardened of gamers. But here, laughter rather than frustration results.

Although this is a mini-game experience, each set of levels tie together a string of themed games and take a good five to ten minutes each. It is worth setting aside half an hour or so to play this game. As we mentioned, WarioWare: Touched is a little shorter than the other games in the series, clocking in at around five or six hours first time through.

Although all the WarioWare games are suitable for novice and experience players, WarioWare: Touched brings the experience more directly to a new audience. Its direct touch, tap and blow interface make it more fun for younger players, which combine with its shorter attention span quick fire levels to create an ideal experience.

The necessity of reading the introductory one word clues and the limited time mean that the very young players will struggle. Again, my five year old was foxed by the limited time and the sheer variety of tasks. Selecting a single repeatable mini-game helped, although this soon became a little repetitive for her.

You can support Andy by buying WarioWare: Touched